Following on from trying out my first game of IABSM, I wanted to try out the rules again and made this our Christmas game. Dean and Ninjasaurus Rex joined me the week before Xmas and I talked them through the rules. This game was set in Malaya again, and was a fictional engagement just after the Japanese had broken through the Allied lines during the disastrous Battle of the Slim River. 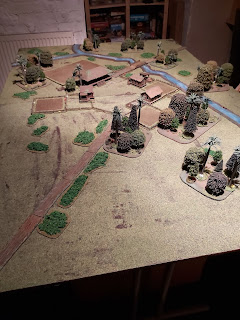 The mixed British and Indian force was defending a palm plantation against the attacking Japanese. My defence consisted of two platoons of infantry, supported by two 2 pounder anti-tank guns. Their Japanese attack had two platoons of infantry with three Type 97 tanks in support. The Japanese elected to split into a two pronged attack down the road and through the jungle on their left flank. The village held a battalion refuelling point which was the objective for the Japanese attack. 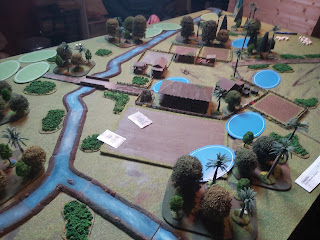 Immediately the Japanese infantry fell on the British defenders in the village buildings. 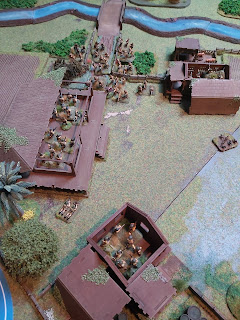 Their weight of numbers carried them through the first wave of the assault down the road. 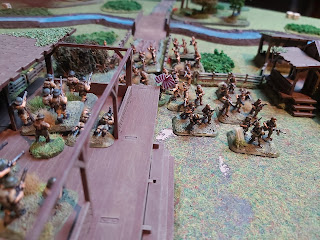 More Japanese poured over the fields and made contact with the other British infantry. 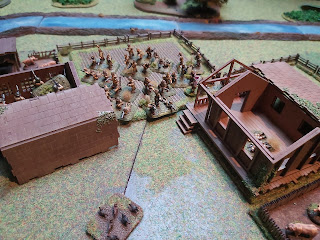 Heavy fighting saw a lot of Japanese casualties, but they took their first objectives. 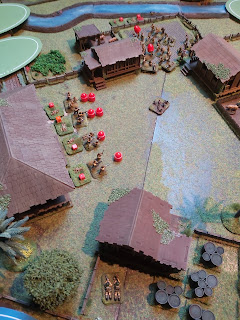 The Japanese Big men spur on the rest of the platoon! 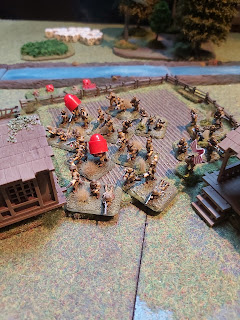 The Indians faced another platoon of Japanese infantry on the right flank of the defence line. 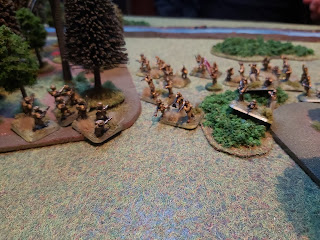 Passing through the village some of the Japanese soldiers smash into the 2 pounders who are caught in the open! 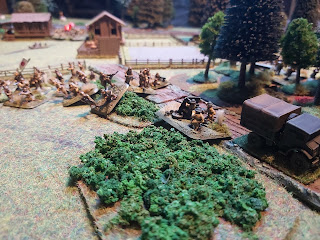 Meanwhile, the battalion refuelling area comes under threat, defended by a single 2 pounder. 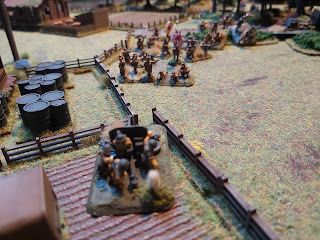 The anti-tank guns and transports are soon destroyed by the infantry attack. But the attackers lose men in their efforts 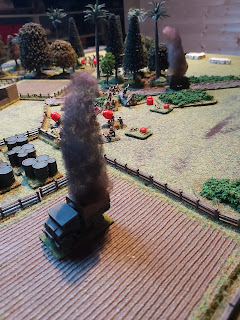 Meanwhile on the British left flank the soldiers holding the tree line exchanged shots with the Japanese in the village buildings. 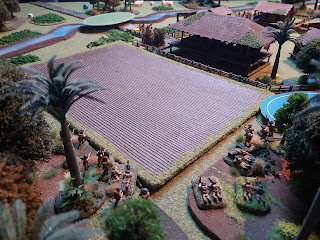 But the Japanese support arrives in the form of three Type 97 tanks. The Allies have little anti-tank defences besides Boys AT rifles. 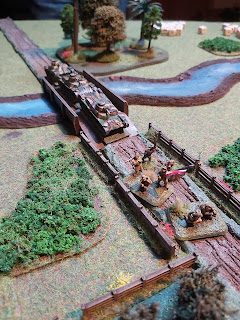 Heading towards the tree line, the tanks take ineffectual fire from the anti-tank rifles. 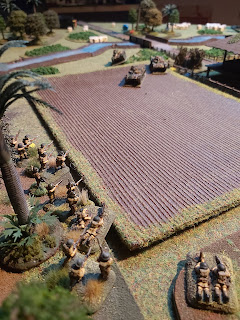 Meanwhile, the last British defenders are pushed out of the last building in the village with heavy casualties and shock. 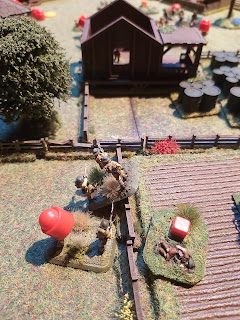 The Japanese attack has been successful everywhere and the defenders are in a general retreat. 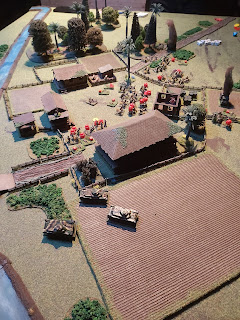 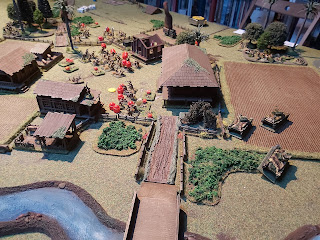 The battalion refuelling point falls to the Japanese attackers. 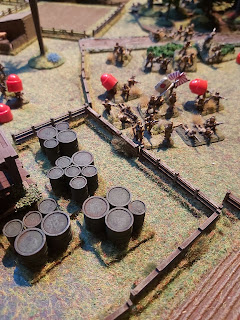 The game was over with a major Japanese victory. Although the Allied defenders had caused heavy casualties, they had lost their anti-tank guns, transports and the refuelling point. Their defence line was in disarray and the Japanese were pushing back across the board. This was very similar from a historical point to the actual Battle of the Slim River, with the Japanese running riot in the Allied rear areas. You can find out more about this battle on the Storm of Steel Wargaming video on the subject (click HERE). As another game of IABSM, this was an exciting clash and we all enjoyed the quick play aspect of the rules. We all quickly had the basic rules in our heads and there was little referring to the rules during the game. The one thing I missed out was having my British defenders concealed at the start of the game. This is something I need to understand a bit better for future. But we are still learning the system!

Speaking of the Malaya campaign, the first video of 2020 on the Storm of Steel Wargaming channel is about the Battle of Gemas, fought between the Australians and the Japanese on the 14th of January 1942. Please watch it here (and please subscribe to the channel!):