I have been revisiting the Malaya campaign in recent weeks. In the past we have used Rapid Fire! to play the campaign. Unfortunately, we ran to the end of the scenarios in Michael A Sayce's campaign booklets and I thought this was a great time to have a fresh look at things. After attending Steel Lard and looking more into the Too Fat Lardies rules in general, I am looking at continuing things with either I Ain't Been Shot, Mum, or Chain of Command.  Both sets of rules have support documents for the Far East, including The Fall of the Lion Gate an excellent campaign book for Malaya. So, I have recently painted some Japanese Big Men to help in this change of direction. 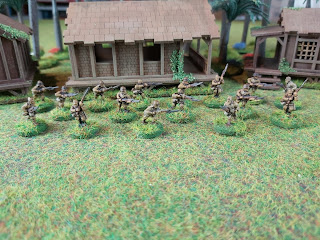 Peter Pig do a great line in Japanese figures, with a lot of nice poses. The only criticism I have is that their rifles are a little short compared to the Arisaka rifles carried by the Japanese soldiers. But, to be honest, amongst my friends I am the only one that will ever notice this... The chaps above are the lower level platoon commanders, but can also be used as extra single figures for casualties. The guys below are the higher level commanders. These are nice figures with a lot of character and any Japanese force HAS to include men carrying flags! 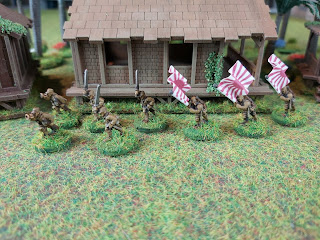 As I said, Rapid Fire! feels a little clunky these days, having tried out the Lardy rules I really see the difference in the games and the more 'modern' and sleeker rules offered by TFL. I used these Big Men in a recent solo IABSM game, set in Malaya, you can read the AAR by clicking HERE.

As the new year has come into sight, I will be picking up on making more content for the Storm of Steel Wargaming channel on Youtube, for now, here's an old video on the Fall of Hong Kong 1941. Please subscribe to the channel for new videos to come: