The next cavalry division of napoleon's Armee Du Nord is the 5th Cavalry Division. This was commanded by Général de Division Jacques Gervais, baron Subervie. The units in the division were the 1st and 2nd Lanciers and the 11th Chasseurs A Cheval. 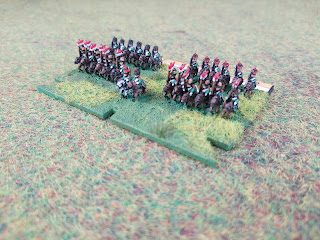 This Division fought at Ligny, on the French left flank. It did little during the battle, with feints and artillery duels with the Prussian right wing. On the 17th of June it was involved in the follow up of Wellington's army as they withdrew from Quatre-Bras.  At Genappe it tried to charge the Allied rearguard in a thunderstorm. 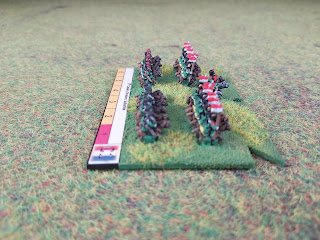 At Waterloo, the 5th Division participated with VI Corps in attempting to hold back the Prussians at Plancenoit and charged and checked the cavalry of Bulow's corps. 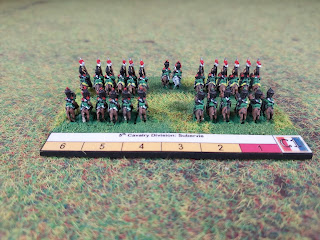 Another cavalry base is now complete for the Armee Du Nord, there's not many bases left to complete now.


Last weekend, I was invited along to Steel Lard, the Too Fat Lardies games event in Sheffield. It was a great chance to try out some of the Lardies' rules, including Chain of Command, Kiss Me Hardy and Algenon Pulls It Off. They were great games and I made a video of the day. Check it out here: