On Sunday, after FIASCO (see below for a video show report), Dean and I tried out Gaslands for the first time. We have both been painting diecast cars, me for Gaslands, him for Dark Future, but as playing Dark Future is the gaming equivalent of watching paint dry we decided to give Gaslands a bash! 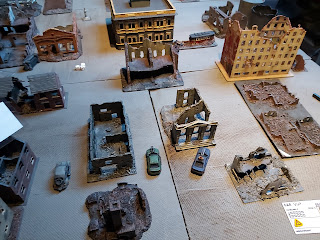 We both had three cars armed with simple machine guns, as we didn't want to load up too much sauce as we worked our way through the basic rules. This was definitely a learning game and as such, I set the scenery up wrong, to be honest. I wanted it to be a speedy dash around a ruined city. However this caused the problem of too many tight corners, meaning that I wiped out one car immediately after it hit a building! I was already two down... 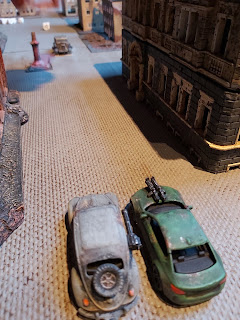 We were getting to grips with the rules, so ignored the 'you touch it, you use it' rule which means you have to use the template you touch, come what may. Given that I had set the scenery up like a city rather than a race track, we ended up with a head on collision between two of the cars. 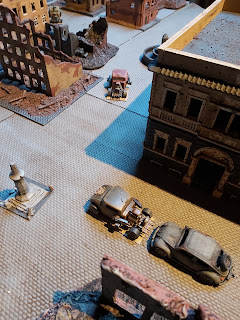 I was booting my cars around and that was the issue, taking corners in fourth gear was always going to end in tears and flips. I was down to one car pretty quickly! 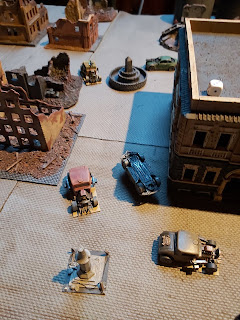 On the other hand, Dean's cars were in low gears, so were trundling around the city... 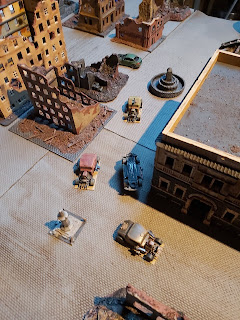 In this way he was able to avoid bouncing off walls, which is what I kept doing. 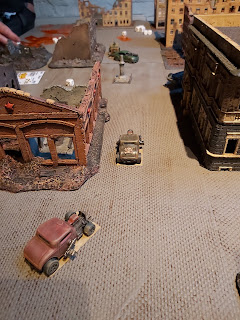 After another collision into a wall and a rear-end from my opponent, he was able to machine gun the final hull points and win the game! 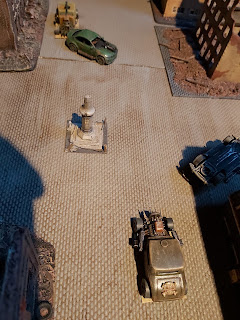 So as a first game it was very enjoyable, however, I should have set the table up as recommended in the rules. This would have made it more like a race than a showdown. Overall, the rules are pretty simple and by the end of the game, most of it was held in our heads. Once we have a couple more games under our belts I think play will speed up considerably and we can move on to some of the extra rules and develop teams properly. I'm looking forward to getting another game set up!

As I mentioned we played this after we went to FIASCO, it was on at the Royal Armouries as usual and I was there with my camera to film it. I got footage of about 90% of the games on show and here they are: