At the weekend, Ninjasaurus Rex and I met up to try out Chain of Command for the first time. I picked up the rules at Salute and have been desperate to try them out since so I set up a mid -war Eastern Front game centred around a small village: 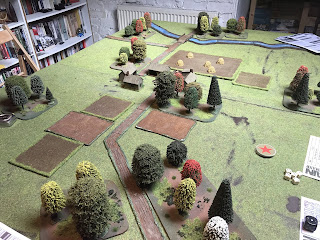 The Germans (me) had a platoon of three sections and a commander with a Sdkfz 250 and a four man section in support. The Soviets (him) had a platoon of three sections with a T-34/76 in support. We played the patrol phase and set up the Jumping Off Points. The Soviet JOPs were gathered around the central village whilst the German JOPs were a little further back in the woods. 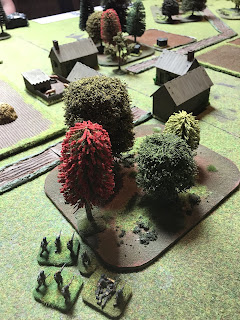 The Soviets units began filtering onto the table, moving towards the farm buildings. 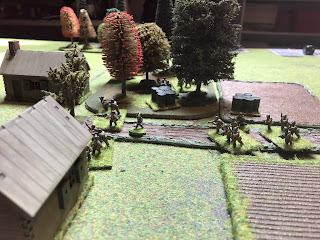 Meanwhile a German section had moved into the woods and exchanged fire with one of the Soviet sections. 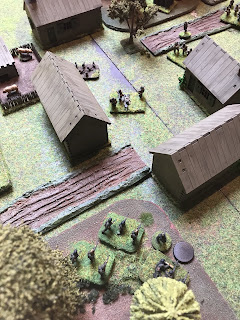 I was then able to deploy my support in the form of the Sdkfz 250. 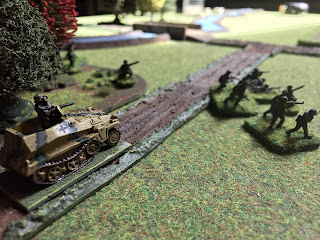 Meanwhile, the Soviets started to outflank the German positions using their senior commander to direct the movement. 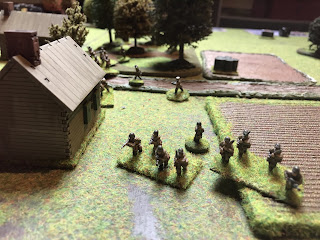 Soviet support arrived and began moving down the road to try to engage the Germans. 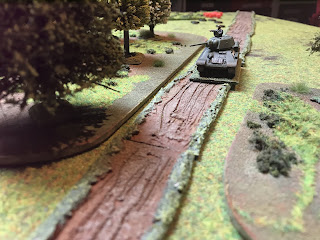 The Germans were slowly gaining ground with help from the supporting halftrack, 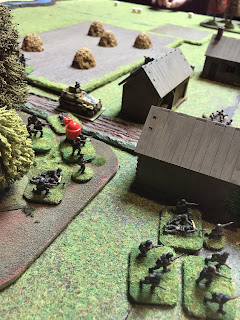 As the German section rounded the corner of the village they faced off with one of the Soviet sections whose advance had stalled slightly. 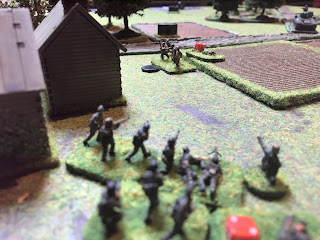 With combined fire from the 250 and the section the Soviet section was destroyed. 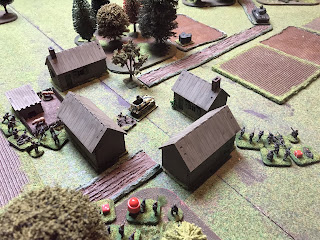 Unfortunately, the German gains were quickly neutralised when the T-34 destroyed the halftrack with accurate fire. 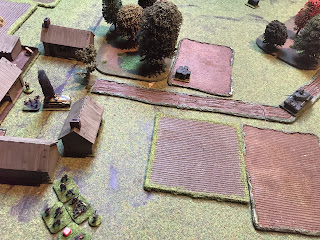 Meanwhile. a German section stormed the barn where one of the Soviet sections was holed up. The fight was intense and the Soviets were almost wiped out to a man. The last remaining soldier fled! 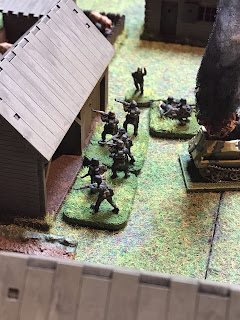 A second assault took place against the final Soviet section, with similar results! 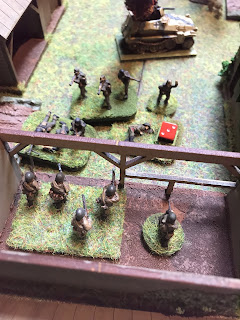 The game ended with half of the final Soviet section fleeing after their morale collapsed and the Germans in control of the village. 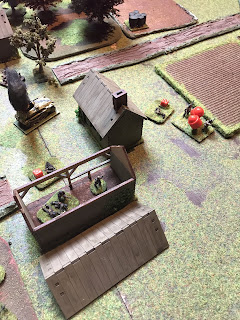 It was a German victory, but only just. All the German sections had taken some kind of damage and there was still the T-34 on the board. But the Soviet morale collapsed and they surrendered or fled. Overall, we both really enjoyed the game and it flowed very easily once we got going. There was some checking back and forth with the rules and I now need to re-read them just to clarify a few points here and there. But overall, we both said it felt far less clunky than other WW2 games we play, such as Rapid Fire. We both enjoyed the patrol phase and jumping off points part the game. Instead of slowly creeping your way across the board this allows for the players to get into the action almost immediately. It's a good modern rule set well worth checking out!

Also worth checking out is the latest Storm of Steel Wargaming Youtube video on the Battle of Bazentin Ridge, July 1916. Have a watch here (and please subscribe to the channel!):