The western extents of Mega-City One have been overrun with zombies, to add to the Judge's considerable hardships the notorious crime family, the Angel gang, have made an appearance searching for the fabled Judge Child. The Judge Child holds the key to defeating the walking dead roaming the city, so Judge Dredd has to forge an uneasy truce with Pa, Link, Junior, Fink and the lunatic Mean Machine... So begins this weekend's game of Zombicide... 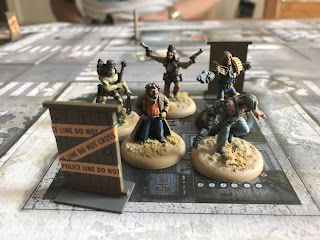 Judge Dredd and the Angels held out in a small hut in the centre of Sector 46, it was quiet, too quiet... Until the dead began to appear down the long road... 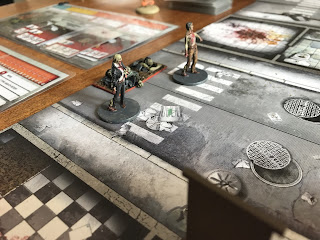 Thinking it would easier to find the Judge Child by splitting up and covering as much ground as possible, Dredd, Link and Fink stormed across the road to enter the nearby building. Smashing down the door alerted some zombies to their arrival... 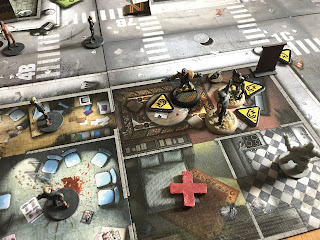 Meanwhile, Pa, Junior and the Mean Machine check the diner for clues for the Child. Their search is fruitless though! 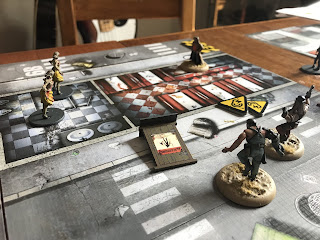 With no luck in the diner, they check the next location, finding yet more zombies in the building. 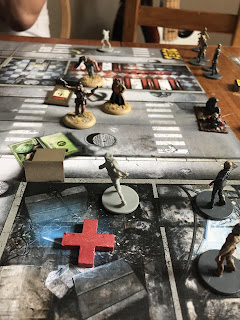 Dredd, Fink and Link work their way through one of the buildings, again, the Judge Child wasn't there! 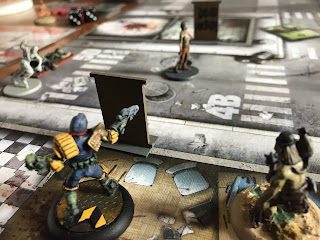 Although the streets are filling up with the living dead, Dredd and Link make a move. With help from Ratty they start nailing the dead-heads! 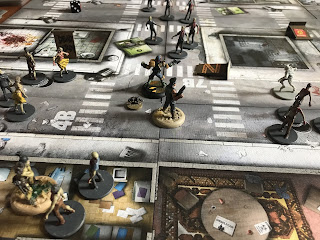 Meanwhile, Pa, Junior and Mean are not fairing much better as they are boxed in by the dead! 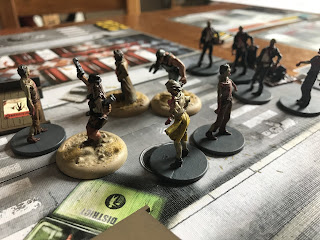 After clearing the streets with rapid fire from Dredd's Lawgiver, the Angels and the Judge begin forming back together as a group to continue the search. 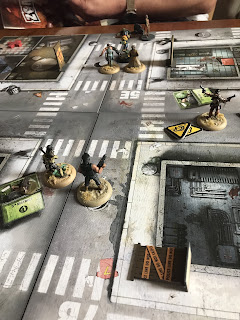 Things are not getting better though as more mindless zombies appear... 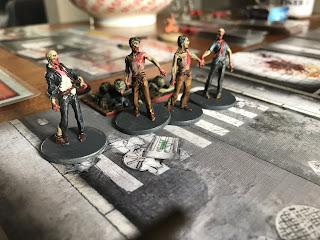 However, Pa manages to locate the Judge Child! Now all the team need to do is get off the streets and get to safety! 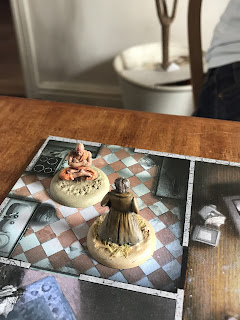 This is not as easy as it sounds, zombies are moving in on their position, and fast! 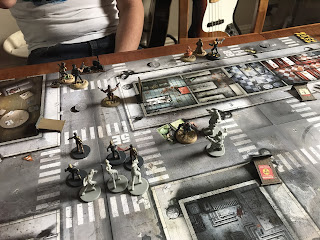 More and more zombies arrive to swell the ranks of the rotters... 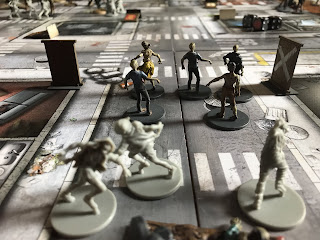 As the rest of the team make their escapes, Junior remains behind taking shots at the zombies! 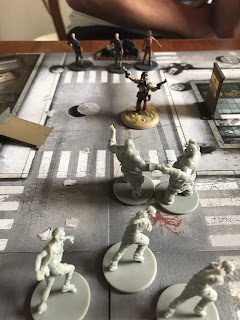 But the end result is inevitable, zombies swamp his position and Junior is torn limb from limb! 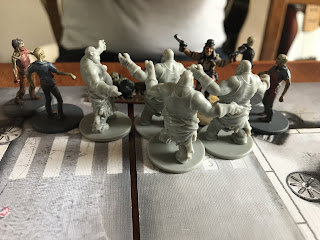 This game of Zombicide was designed by Dean as a take on the Judge Child quest from the Judge Dredd comic strips. He designed the character cards for the game and it all worked really well. We both controlled three characters and actually won the mission by escaping with the Judge Child despite Junior buying the farm. Zombicide is a fun game with a lot of tension and tactical possibilities and it's always a pleasure to play. It is a theme that can fit with most modern and future time periods, so it was good to use some other figures than the ones that came in the box.

As we were on a high from victory, we then played a game of Arkham Horror the card game. It was all hubris though, as the game spanked us hard... 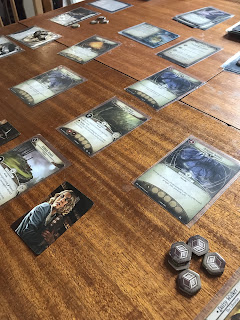 And to finish up, I recently released a new video over on my Youtube channel (please subscribe!), it's about the British Army's tactical development in the First World War, check it out here: