Iv Corps of Napoleon's Army is almost complete with the 2nd Brigade of the 14th Division, which was commanded by Général de Brigade Baron Jean-Francois Toussaint. This had the battalions of the 44th and 50th Regiments of Line. This unit is understrength, which is why I have only put three battalions on the base in order to help us remember during a game.At Ligny, this brigade was with the rest of IV Corps opposite the village of Tongrinelle and skirmished with Prussian troops. 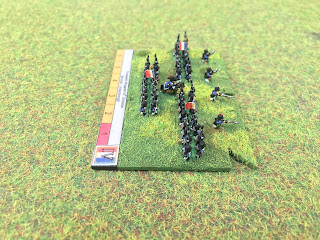 At Wavre, the brigade was part of the aborted attack on the village late in the day when Hulot was wounded and ordered to halt the advance. 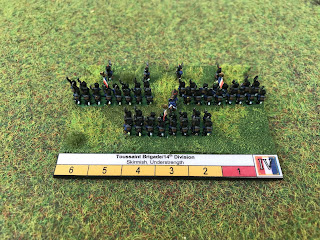 This is the last infantry brigade I need for IV Corps, so all there is left to do is the cavalry and that is another French Corps complete!

I went to Salute last weekend for the first time ever, here is a video of the event on the Storm of Steel Wargaming Youtube channel: