Moving ahead with the French Army, here is the next brigade. It is 1st Brigade of 11th Division, III Corps commanded by Général de Brigade Baron Francois-Bertrand Dufour and it was composed of the 12th and 56th Infantry Regiments of Line. 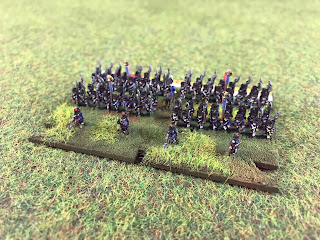 Positioned in the centre of III Corps, the brigade faced the village of Saint Armand at Ligny on the 16th of June and took place in the fighting there. They played an important role in the see-saw battle of the small village. 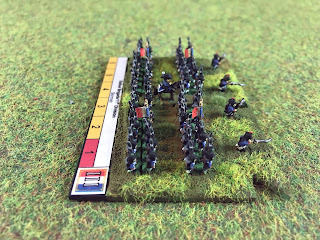 Later, this unit fought at Wavre as part of Grouchy's force that attacked the Prussian III Corps on the 18th and 19th of June. Although they played only a small part in this action. This battle was a hollow victory for the French, as Napoleon had already been beaten at Waterloo on the 18th. 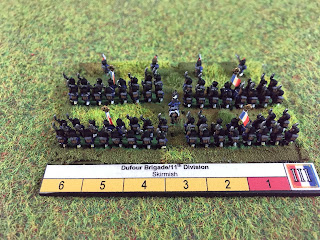 More blue paint thrown about and another French brigade is finished! The information I got for the units in this brigade came from the Osprey Campaign Series books: Waterloo 1815 (2) Ligny and Waterloo 1815 (3) Mont St Jean and Wavre, both by John Franklin (links are Amazon affiliate links)

In other news, I made a video of a game of the second edition of Axis and Allies that I played a while back, it's long video, but you can watch it on the Storm of Steel Youtube channel below, and please subscribe for more in the future!