Avance! As the French say! More mini men completed for the 100 Days campaign. This time it's the 2nd Brigade of 10th Division of III Corps, commanded by Général de Brigade Baron Rene-Joseph Dupeyroux. 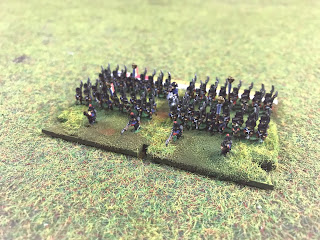 This brigade is interesting in that not only did it have the 22nd and 70th Regiments of Line, but also included the 2nd Foreign Regiment (Swiss). This gave me a brief chance to paint something other than blue! The Swiss wore red uniforms and you can see them on the back row of the base. 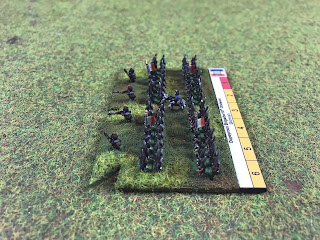 This is another, reasonably standard French formation with 6 Elan and only skirmishers as a unit trait. 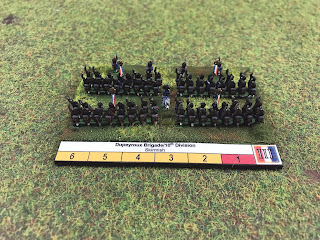 The French are still proving to be quick(ish) to paint and I am averaging about an hour and a half to complete each of these bases. That doesn't include drying times, of course, but it's pretty quick compared to the few hours it used to take me!

In other news, I received my copy of Judge Dredd: The Cursed Earth, the new card game by Osprey Games. I've not had a chance to try it out yet, but I have done a box opening video for Storm of Steel on Youtube, check it out here (and don't forget to subscribe!):