Mansions of Madness: A Review

No one would have believed, in the first years of the 20th century, that human affairs were being watched from the timeless worlds of space. No one could have dreamed that we were being scrutinised as someone with a microscope studies creatures that swarm and multiply in a drop of water. Few men even considered the possibility of life on other dimensions. And yet, across the gulf of space and time, minds immeasurably superior to ours regarded this Earth with envious eyes, and slowly, and surely, they drew their plans against us… Welcome to the horror encased within Mansions of Madness...

Mansions of Madness is a board game from Fantasy Flight Games which has been around for a few years now. This review is concerned with the Second Edition of the game, which has some considerable changes from the First Edition. The game plays as a co-operative experience, pitting the players against the crawling chaos of the Cthulhu mythos and this aspect is the big change between first and second edition. In the former, the forces of evil were controlled by a player, in the latter, a computer app controls the mythos enemy. The game is for 1-5 players, but allows for players to control as many investigators as they want, so a solo game could still involve five investigators. 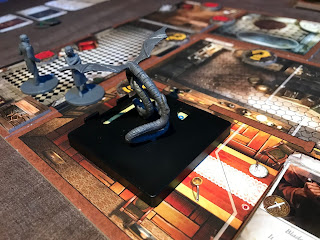 Similarly to a role-playing game, each player takes a character to control during the game and these have different skills and abilities and can take differing amounts of physical and mental trauma (Damage and Horror). Some of the characters are the same ones in other FFG Lovecraft games, such as Arkham Horror: The Card Game, so they will be familiar to people who have played those games and give a sense of the games being in the same universe. At set up, the app decides the equipment that the team begin with, which they then distribute as they see fit depending on the strengths and weaknesses of the individuals. This list of items changes if you use a different set of investigators and adds a replay value to the game from the off. 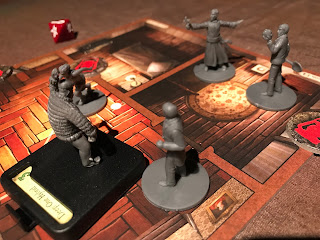 Mansions of Madness is played in a series of scenarios each with an unexplored map which grows as the players investigate their surroundings. As players investigate the app tells you which of the beautifully illustrated map tiles to place as you advance through the story. The app also indicates areas of interest, connecting rooms, non-player characters and spawning creatures of the night. These are placed as tokens on the board to help players decide their next move. As only the app knows the full depth and breadth of the scenario map it allows you to play again to try to find all the locations of that particular map as you may not have had a chance to open all the doors and check behind all the cupboards. 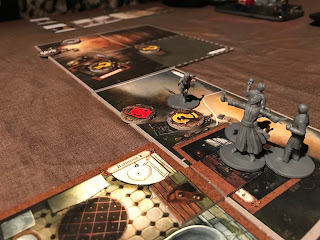 In each turn, the investigators have two actions they can complete, move, attack, investigate, evade and several others. These can be carried out in any sequence the investigators deem best, so one investigator could evade a monster to allow another with better attack skills to move in. Most actions, except move,are carried out with dice rolls set against a particular skill (e.g. strength) with the consequences of success or failure explained by the app. Sometimes you know the score you need to beat for the test, other times you roll the indicated number of dice, input the number of successes into the app and hope that you've passed! This is very similar to hidden skill tests in many RPGs and adds a sense of tension to the game. 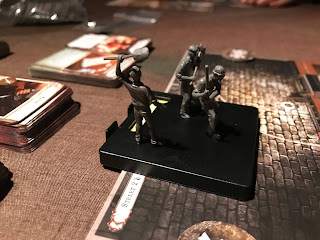 Throughout the investigation, players will be rewarded with equipment that they find, these can be weapons, evidence and a whole host of other knick-knacks designed to aid the players progress. Some will cure horror and damage, some will help evade enemies and some will just be useful for dashing their brains on the sidewalk. On occasion you will also gather clues which can be spent to improve dice rolls from failure to success and are very useful additions to anyone's armoury. 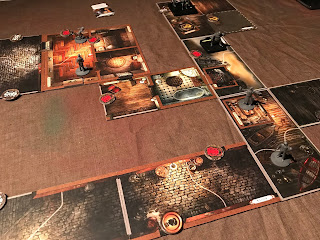 Inevitably the dark forces are conspiring against the investigators and the longer you take in working your way through a scenario the more likely you will lose as more and more enemies gather. In one recent game our priest investigator was swept away by a mob whilst two monsters whaled on an athletic investigator, whose fast running skills couldn't outpace them. Even just losing one investigator from enemy action, damage or horror is enough to instantly end the investigation. To help avoid this happening, it is best to stick together as a group as much as possible. A single investigator is easy pickings for creatures from the mythos... 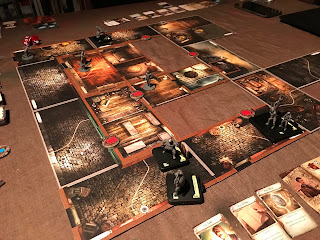 So, is Mansions of Madness good? In a word: YES! It's an excellent game that has a wealth of H P Lovecraft atmosphere, the high production levels we have come to expect of Fantasy Flight Games and enough difficulty to not be a push over, but a learning experience for all players. 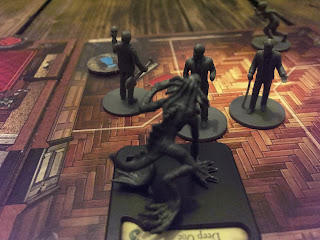 I initially worried that the app would interfere with the tabletop action, switching between the two at first felt clunky and broke up the flow slightly. However, once we got used to using the computer for tests and narration it all fell into place and the idea of having a dispassionate gamesmaster really adds to the game. If you're looking for a game that is similar to a RPG but without the faff of creating characters, writing/reading scenarios, gathering enough players together and generally herding cats then this falls into that category perfectly. 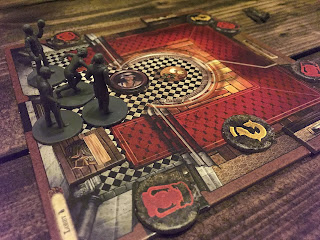 Open the box and you'll be ready to play within half an hour, working your way through the simple learn to play booklet and using the rules reference as and when needed during the game. The app will also save progress so scenarios needn't be completed in one sitting and you could also use this function to revisit scenarios without going through the opening sequences again. However, Mansions of Madness is not cheap, but it is worth every penny for its massive range of playability, artwork, production and atmosphere. There are also many expansions and extra scenarios available, so you can continue revisiting the dark places of the earth.

Now, if you will excuse me, I have been holed up in this hotel in Innsmouth for a few days now and someone has been rattling at the door all night. I need to find that bottle of holy water I brought with me...

In other news, Storm of Steel is now on Youtube, this is the first video, a how to play of Arkham Horror the Card game, have a watch here: