If there's something that the Rebels in Star Wars do well it's espionage and surgical strikes, from dropping proton torpedoes down the shafts of the original Death Star, to bombing the shield generator protecting the second Death Star. They know where to hit the Empire where it hurts and proves that sometimes might isn't always right. These Rebel Commandos are the latest addition to my Star Wars Legion project.

The actually contains two units. The first is a five man unit of commandos in camo cloaks and with one armed with a proton charge to enact saboteur missions. The charge can be set and blown when the enemy come in range, meaning it's a good weapon to arm in a position that the enemy has to move through. Added to this, the commandos can also use a double move to get into a better position and are sharpshooters, reducing the target's cover!

The second unit is a two figure sniper team, armed with a DH-447 sniper rifle. This weapon has high velocity, meaning the target can't use doge tokens! 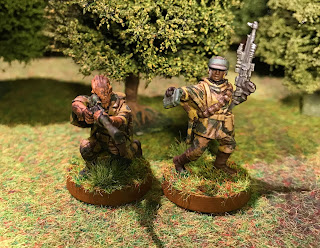 I painted the DH-447 with a basic camo pattern as modern sniper rifles have a similar pattern printed on them to aid the sniper to hide. 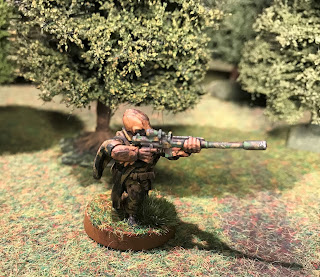 I will either use these figures in the teams as above, or mix the commandos in with my other Rebel figures as a specialist unit added to the platoon. However I do it, they will certainly add some more interest to the battlefield!
Labels: Fantasy Flight Games Legion Rebels Science Fiction Star Wars