On the 14th of October 1918 the Battle of Courtrai began, it was another body blow to a defeated German Army, aimed at clearing the northern portion of the western front trench line. Supporting the Belgian army, the British Army that had taken its lessons from the previous four year's fighting was in the vanguard cutting through a German defence line that barely existed any more. On Sunday (the 100th Anniversary) we played another game of Trench Hammer based loosely on a platoon of the 2/15th (Civil Service Rifles) London Regiment clearing a typical Belgian hamlet in the battle. 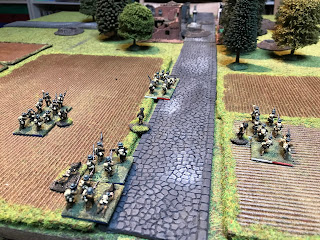 The night before, I had downloaded, printed and laminated Jozi's reference sheets for Trench Hammer. These are an excellent resource and very useful for reference during our game. I laminated them, in order to be able to use a dry wipe marker on them. I set up the board according to the Too Fat Lardies' 'Clearing a Village' scenario from their excellent Iron Hearts and Stout Troopers First World War scenario book. Although this was designed for their Through the Mud and Blood rules, it works perfectly for Trench Hammer. 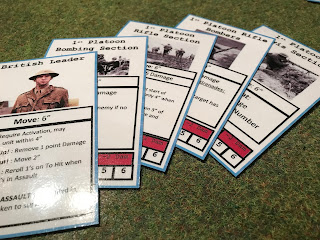 The Sunday afternoon session was intended to introduce Ninjasaurus Rex to the game and see how it played with two players. The British attackers were advancing in artillery formation (as per SS143) and consisted of a platoon of a rifle section, a bomber section, rifle bomber section and a Lewis gun section. The German defenders were a shattered battalion HQ consisting of three rifle gruppe. Both sides had a single commander. He took the British in first game and I took the defending Germans in the hamlet ruins. 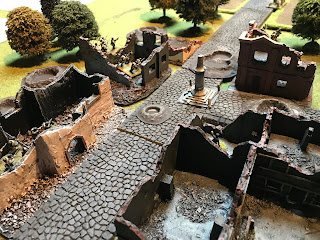 Ninjasaurus is not a scholar of British infantry fighting tactics of 1918 and his attack demonstrated this. His rifle section advanced in open order against the ruined buildings. 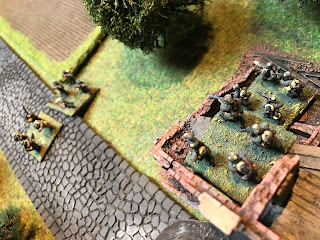 Inevitably, they were quickly dispatched by German rifle fire. He pushed his rifle bombers and Lewis section forward behind the cover of the trees. 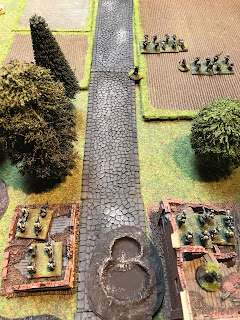 Using the cover of the woodland, the Rifle bombers and Lewis gunners moved into position to attack the German rifle gruppe in the ruins. 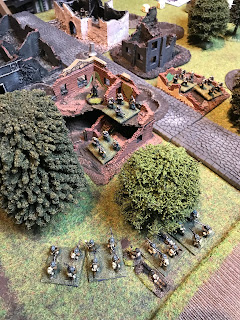 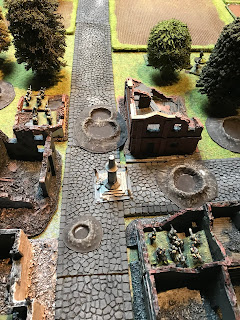 The British rifle bombers occupied the empty building on the edge of the hamlet, but despite threatening the German flank, they held their ground and their return fire destroyed the British section. With only his Lewis gun section remaining we called it a day for the first game. Then we swapped sides. 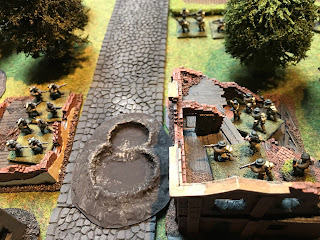 The first game proved that ignoring British infantry tactics of 1918 is the easiest way to lose! There's a reason that British platoons had the support fire of a Lewis gun and Rifle Grenades. I wanted to try out the protocols of SS143, the British training pamphlet that deals with small unit actions. 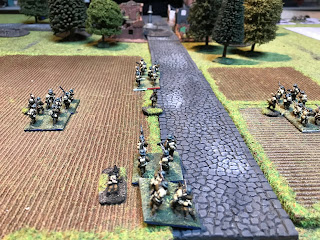 I immediately moved my Rifle grenadiers and Lewis gun into a position on the left flank to cover the advance of the bombers and riflemen on the right flank, whilst remaining out of sight of some of the German defenders. 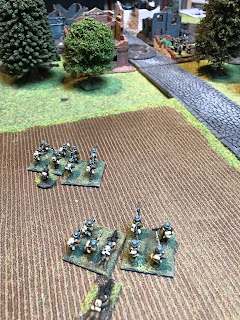 On the right flank the British commander followed the bombers and riflemen as they closed in on the German defence line. 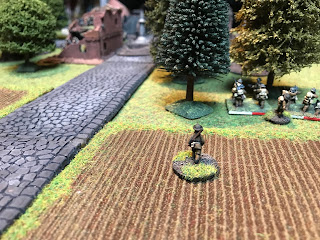 With a heavy fire from the rifle bombers and Lewis section, the bombers moved into a shell hole ready to attack the German rifle gruppe in the ruins. 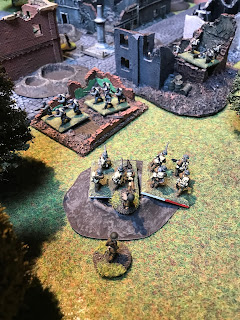 Wiping out the gruppe, the bombers seize the position. 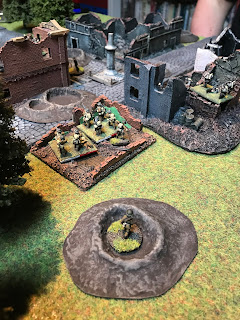 Turning their attention to the other rifle gruppe, the bombers annihilate them as well! 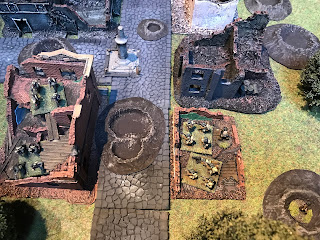 Then the final gruppe fell to the heavy fire of the British support. Although the rifle and bomber sections were wiped out, the British had captured the hamlet and won the game. 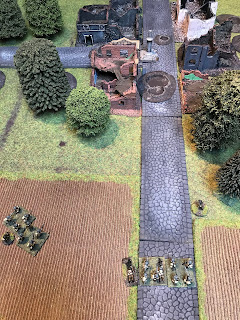 We discussed the rules after the second game and both of us agreed that it seemed to be over too quick. This may have been to do with the 'new' assault rules, which Jozi had put on his reference sheets.

We played this step incorrectly, I think. We played it as though an assault was the same as any other attack, ie you roll to hit, then roll for damage, then the defender fires back. THEN we also did the new assault step, where both players rolled a dice, with the loser taking the amount of damage as per the difference in the dice rolls. I realised afterwards that the assault step replaces the first step completely. I think the mistake came from the fact that the assault factor was still present on the QRS, confusing me as to how to conduct assaults. My fault, not Jozi's!

Despite this feeling that the game was over in a very short time due to our confusion with assaults, we both had fun and enjoyed the three games we played and it was nice to see that using tactics of the time really helped to clear the village! 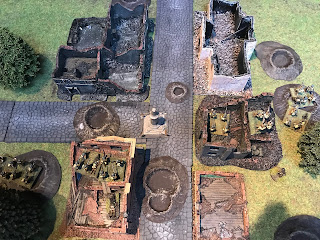 In other anniversary news, today was my second year anniversary of working in the Civil Service, so the use of the unit in this game was quite deliberate...
Labels: 15mm AAR Product review Trench Hammer WW1