Oh My Goods!: A Review

Alexander Pfister is quickly becoming my favourite game designer. His ingenuity with using cards in different ways to how you would expect is always refreshing to see in a game. Other great games of his include the island building game Isle of Skye and the card game Port Royal, the latter uses both sides of the cards during play. Oh My Goods! takes this up a level and each card has several different uses depending on where and when it is played in the game. 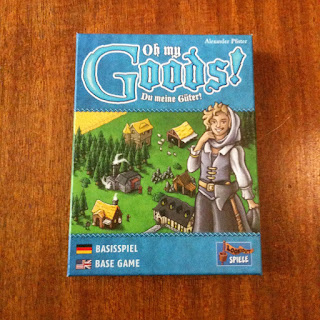 Oh My Goods! is a production game fused with a high degree of luck and gambling with the players taking the roles of workers producing barrels of goods. The game-play is simple with a player creating a marketplace by drawing a card at a time and laying it face up from the draw pile. This continues until two half suns are revealed on any of the cards. Players then decide if they want to try to produce goods from one of their production buildings in one of two ways: efficiently, or sloppily. if they choose efficiently then they have to have the exact amount of resources (from the market and their hand) to produce two barrels. If they choose sloppy production, they can forego one resource to produce only one barrel. The players also decide if they want to build a new production building at this point. Then further cards are drawn into the market, again until two half suns are shown. Players produce barrels of goods if there are enough resources to allow them to do so in the market and their hand, they then spend these barrels to build the new building they had decided on. 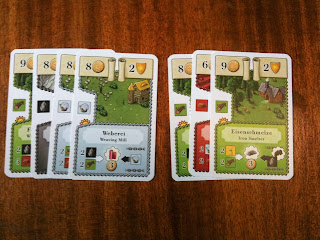 The back of the cards are printed with a barrel and these are placed on the building that produced them, each barrel being worth the amount of coins shown on the bottom of the card. More barrels can be produced with the production chain which allows players to increase their output by combining different buildings! also available are workers who can be used to staff buildings and produce even more barrels. 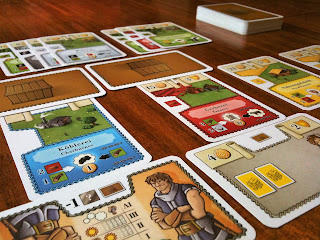 The game finishes with the first player who builds eight production buildings and victory points are counted with the winner being the highest. The cards in Oh My Goods! looks complicated at first glance, but once you get past the multi-use card design you find an elegant, subtle and fun game. There is a high degree of gambling, hoping that your cards appear in the marketplace and it can be frustrating when you end up producing nothing! Oh My Goods! can be played by two to four people and would make for a great family game or an introduction game to people not used to other card games, as it expands on what each card can do and makes you think differently about the cards in play. Most games will not last longer than about half an hour, so it can also fit in a wind-down game after a longer gaming session. The price is also low and there is a lot of re-playability making Oh My Goods! an excellent purchase!
Labels: Board Game Review board games Card Games Product review