In Star Wars, an Imperial officer ordered his heavy blaster crew to not destroy an escape pod launched from the Tantive IV blockade runner. In the following report, the officer declared that the pod had registered no life forms. This single careless act eventually resulted in an act of terrorism and the destruction of Imperial property committed by a radicalised moisture farmer during the Battle of Yavin. The importance of this escape pod cannot be understated when examining the disruption caused by this band of radical terrorists. 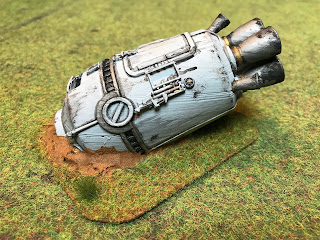 3D printing is a wonderful thing and the many and varied models that are available is mind boggling. Searching EBay for Star Wars Legion pieces, I stumbled on this escape pod model. It is perfect for adding an interesting piece of terrain to the battlefield. 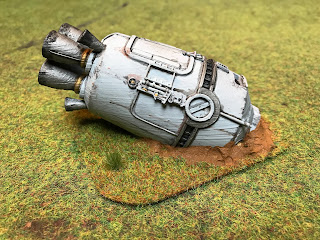 I added greebles to the kit to give it some detailing. These all came from my bits box and included the breech mechanisms of some Soviet 76mm guns, the bomb racks from a Bristol Fighter and the gun bracket from a Marder III. Always hang on to the extras you get in kits as you never know when you'll need them! I added some tubing and fuel pipes with copper wire and painted the model in a similar way to the original model in Star Wars. The model was slightly basic and the printing was not of the highest quality, unfortunately. I should have painted the piece entirely in varnish to fill in the print lines, but I added the greebles before I realised this! A good deal of weathering helped with this though. 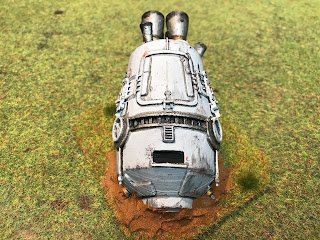 Basing the model helps it blend into my gaming table and I also gave it a slight crater of earth from the impact of the crash. It fits really well with the Legion figures and will make for an interesting objective to capture or protect. 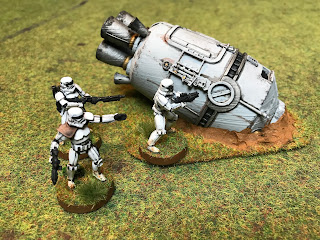