The Empire Strikes Back; A Legion AAR

This weekend, Dean crawled out of the WIP that is his new house to meet up with Ninjasaurus and I for another game of Star Wars Legion. I have been working on the figures for a while and have enough for a decent sized game, so it was a good opportunity to try it out again. 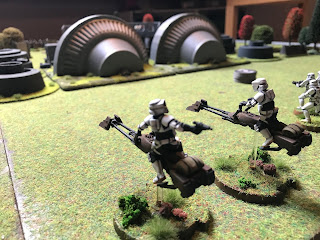 The game was a simple meeting engagement fought over a battlefield scattered with terrain and a landing pad and some junkers' cottages.  The Imperials were led by Darth Vader, supported by four squads each of eight Stormtroopers and a two man HQ. Scouts were provided by two speederbikes. Facing them was the plucky Luke Skywalker, leading five eight men squads of Rebel troopers and a supporting AT-RT. The Imperials won the initiative in the first round and sent the Speederbikes ahead of the main force to engage the advancing Rebels 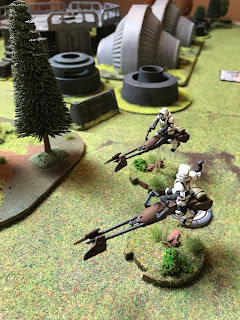 Two Rebels units closed together under the protection of the AT-RT, spotting the forces of the Empire ahead of them.It was too far a distance to begin firing yet though. 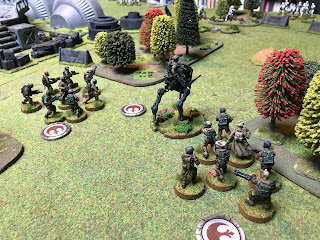 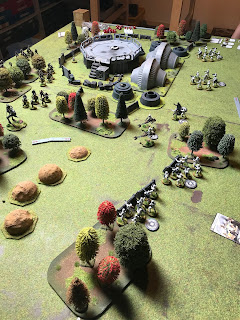 The Speederbikes make contact with the Rebel AT-RT and the first shots are exchanged! 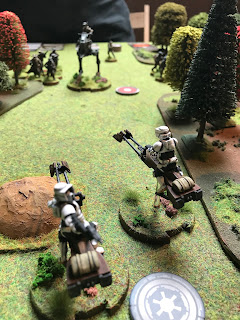 Facing no opposition, Stormtroopers make preparations to climb onto the landing pad. 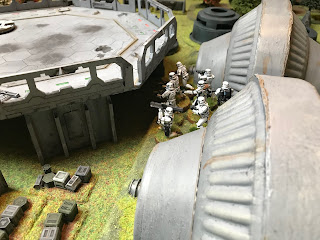 A unit of Stormtroopers broke cover to support the Speederbikes attack on the AT-RT after they had received a ION hit and taken damage. Things were hotting up in the centre of the field, Darth Vader was in a position to attack and more Rebel units were arriving to lend their support. 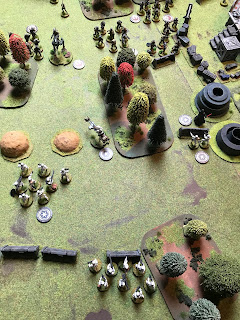 Vader attacked the Rebel unit by using the Force to throw his lightsaber, taking down a trooper and also causing suppression. The Rebel return fire was also deflected back at them! 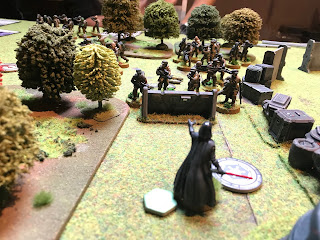 Meanwhile on the edge of the battlefield, Rebels and Stormtroopers were exchanging fire as Luke advanced to tackle the men in white. 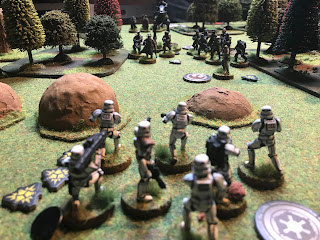 Gaining the high ground, Stormtroopers clamber onto the landing pad, giving them a good view of the Rebel flanks 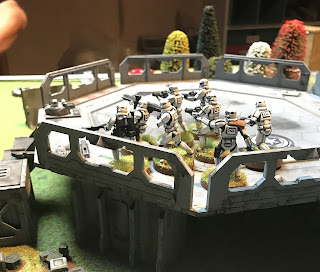 From this position they are able to fire down on the Rebels opposite Lord Vader. 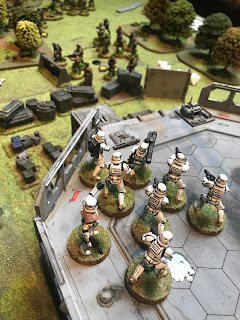 Luke then rushed the Stormtrooper positions and attacked them with his trusty lightsaber. 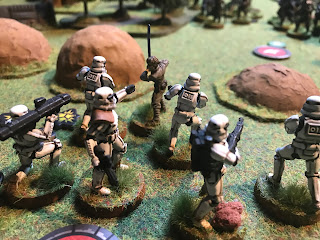 In seconds the melee is over and Luke wipes out the entire unit! 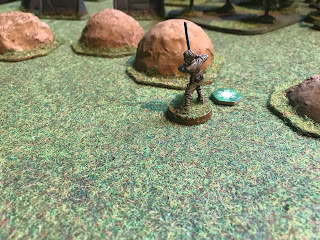 Darth Vader is equally vicious against a Rebel unit, all of whom bar one fall to his lightsaber attack. 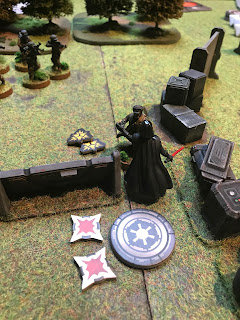 The threat on the Imperial flank is increasing with the arrival of more Rebel troops supported by Luke. Using the cover of the woods, Stormtroopers exchange shots with them. 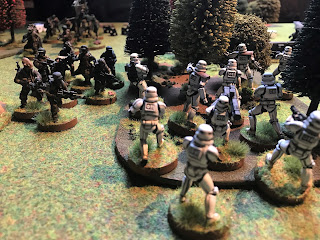 However, a combination of fire from the Stormtroopers and Vader's lightsaber attack tears a hole in the centre of the Rebel line. 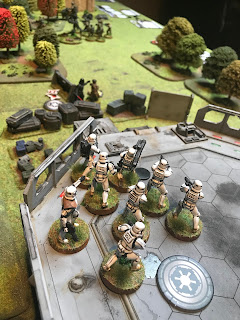 Using the AT-RT on Vader and with support from the infantry the Rebels bring down the Sith Lord! 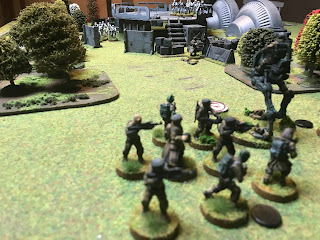 On the flank, the unit of Stormtroopers manage to take Luke out, eliminating the immediate threat of that flashing blue blade! 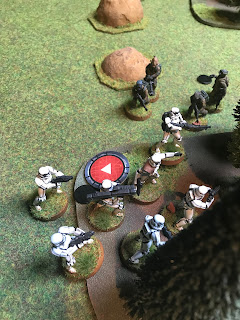 With Vader gone, the AT-RT advances on the Stormtroopers, but has little effect. 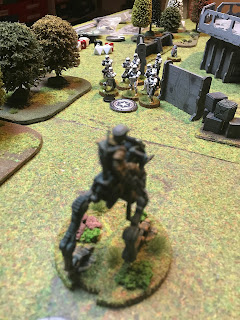 But facing the AT-RT is two squads of Stormtroopers and the inevitable result of it taking fire and being destroyed. 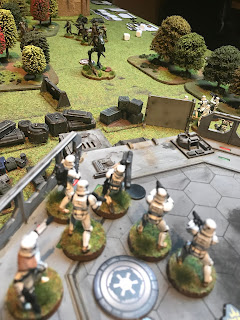 The Rebel unit now known as the 'Vader Killers' blasted one of the Stormtrooper units doing heavy damage. Meanwhile, the fighting around the woods was still intense. 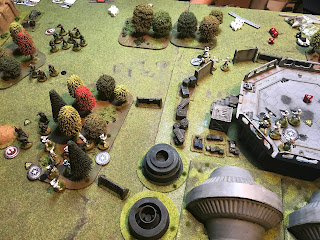 Sensing victory is close, the Stormtroopers on the landing pad advance and start firing at the last of the Rebels. 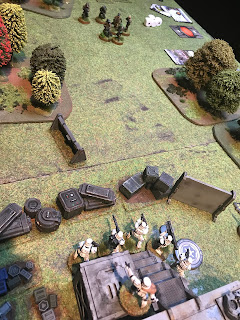 Under the withering fire the remaining Rebel units began to fall back, the Empire had won the day although it was at a heavy cost 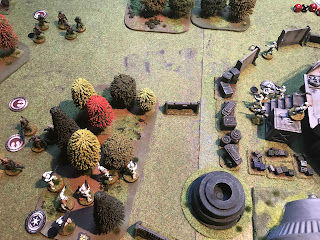 The battle was over and a quick count of the remaining figures showed that the Imperials were victorious, even if it was a very close result.

The game swung back and forth throughout and was an exciting battle that looked as though it could be won by either side at several points. I thought it was all over when Vader went down, but then Luke quickly followed, evening the score again! One of the things that helped a lot was the Stormtrooper defence dice, they have good armour saves and casualties were kept quite low because of this.

With the larger number of figures on the table, the game felt a lot better and although the number of troops complicated things slightly, we all soon had a good handle on the flow of the action. The game wasn't based on a points value and the Rebels had a slightly larger number of figures, but the Stormtroopers precision made short work of them! Legion is a game that definitely needs a sizeable number of troopers to allow for tactical movement across the table, so bare that in mind if it's a game you want to explore (which you should!).
Labels: AAR Fantasy Flight Games Imperial Stormtroopers Legion Rebels Science Fiction Star Wars