More of the Galaxy's Finest

I have been buying Star Wars: Legion figures on EBay from sellers who are buying core box sets and splitting them down. This makes the figure a lot more affordable for me and gives me the freedom to buy exactly what I need. Like this squad of Stormtroopers:

I have decided that I am not going to follow the 'official' unit lists that Legion offers, but I am going to organise my forces along the same lines as the Star Wars Miniatures Battles lists. In a nutshell, this means that my Imperial squads will be 8 figures, with four squads for a platoon. The Rebels, on the other hand will be 10 figure squads, with five squads making a platoon. Obviously these numbers are not set in stone and I will be able to shift things around as scenarios demand, but it's the basic building blocks. It also means a bit of jiggery-pokery with figures as official boxes only come with seven figures.

Speaking of Rebels, I also finished another squad of Alien head swaps. The heads came from Mel's Miniatures on Shapeways and are excellent sculpts with crisp detail. They want to be for the price! 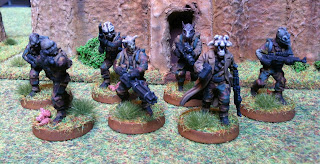 Sticking with Legion, I revisited the barricades that come with the core box. I never liked these, they felt like poorly produced lumps of plastic. However, I was inspired someone's blog (I have lost the address, I'm afraid) who had mounted theirs on bases and made them into better scenery pieces. I cut out some plasticard strips and used Polyfilla to make the barricade look like it was dug into the ground. I also weathered them with rust and streaks and I am much happier with them now. So much so that I even bought another set!

So the Legion project is moving along nicely and soon we will be able to have a game with a decent amount of figures that should allow for more tactical movement.
Labels: Aliens Imperial Legion Rebels scenery Star Wars