Recently I bought the critically acclaimed Arkham Horror: The Card Game. it was first produced by Fantasy Flight Games in 2016 and I had heard good things about it from its release. Based on the writings of H P Lovecraft, the game follows the (mis)adventures of investigators as they work their way through solving clues and fighting the horrific forces of the nightmarish creatures from the Cthulhu Mythos. 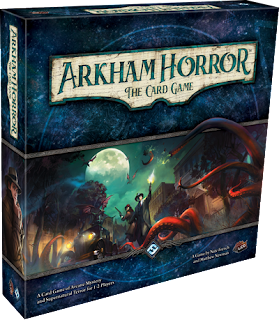 It is primarily a two player game, but can be played as a solo game or, if a second core set is bought, up to four players and a clever, but simple, mechanism adjusts the amount of clues or damage that creatures take depending on how many players there are. As the name suggests, it is a card game, but feels like a good mix of a Role Playing Game and a choose Your Own Adventure. Each player takes a named investigator with a range of skills and a deck of cards that can alter the skill tests, provide equipment or create events that, hopefully, help them towards their goal of defeating the forces of evil. See the end of this review for a video on how to play the game in detail. 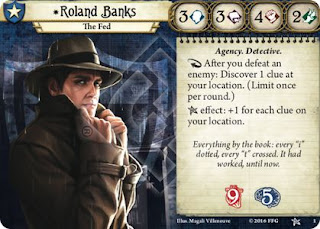 Game play is deceptively simple, each investigator gets three actions per turn, which can include moving, fighting, evading enemies, or a number of other actions. One of the important actions involves playing a card, which means placing an asset card into the player's play area. This could be a weapon, piece of equipment or a skill and they stay in play until defined by the card's timing or are forced out of the player's hand by other events. Skill tests can be improved by discarding cards immediately (without having to use an action to 'Play' the card) which adds to the chance of passing the test. This allows most cards can be used in two ways and sometimes giving a tough decision whether to discard a good piece of long-term equipment for an instantaneous result! 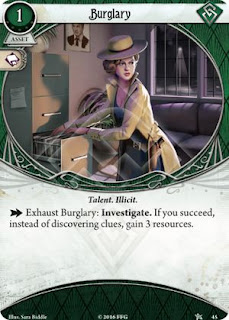 The investigators work their way through the game by solving clues based on a skill test. When enough clues have been collected by the players they can trade them in for advancing the Act Deck. This is the basic storyline mechanism and each scenario has several Act cards that move the adventure along. For example, in the first scenario of the core set the first Act card has a value of two per investigator, meaning you need to gather this many clues to advance to the next stage. 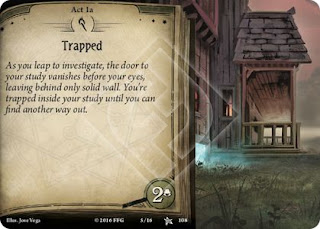 As it is a H P Lovecraft game, things are not going to be easy for the players and the game also features an Agenda Deck. This represents the mythos machinations against humanity and each turn a Doom token is placed on this deck until it reaches a level defined by the card, at this point, the Agenda advances against you. The Agenda deck is the game timer slowly ticking down and certain cards can advance this, so acting quickly is essential! Not only this, but players have to draw cards from the Encounter deck, these cards represent anything from horrific findings to creatures of the night and cause a lot of hassle as the players try their best to solve clues. 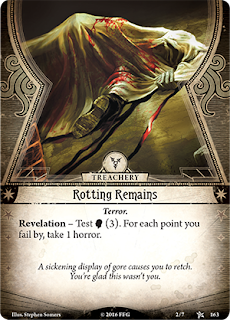 In a nice touch, tests are decided by drawing tokens from the 'chaos bag'. These tokens can give pluses or minuses to the investigator's skill, or some other effect controlled by the scenario or  the individual investigator's skills. As these are tokens and not dice, you can tip the balance of the game, depending on how hard or easy you want the game to be by simply removing or adding tokens. This is one of many nice touches in the game play and allows for infinite possibilities for replay. The core box comes with a three scenario campaign, each subsequent scenario changes depending on the actions or outcomes in the previous one, making a nice narrative that flows and does change in each play.

Added to the above, are the lavish illustrations and game components that FFG excel at, each card is a work of art and really draws you into the mood of the Mythos. On top of this there is a wealth of support in the form of forums and deck building websites at the FFG website. This is what FFG call a Living Card Game (LCG) which means that there is no mixing of cards in the expansion packs, unlike, say Magic: The Gathering, so you know exactly what you will be getting in each expansion you buy. This gives the player more freedom to pick and choose what they want to buy from the range, rather than the marketing ploy of inciting you to buy to get the cards you want. 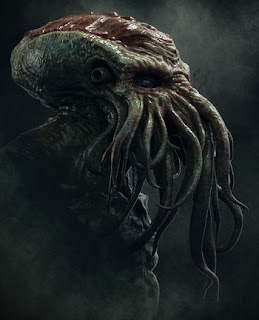 If you're looking for something that isn't as involved as a Role Playing Game, but still manages to maintain the feeling that you have an individual character with individual choices steeped in atmosphere then this is an excellent choice of game. Now, if you will excuse me, I need to get back to this investigation... Where did I put that copy of the Necronomicon....


I recently uploaded a Youtube video showing you how to play Arkham Horror, take a look here as it introduces players to the basic game mechanics: