Back to the Valley of Death AAR

Ninjasaurus Rex was keen on refighting the Afghan versus Soviet game we played recently, partially to test his rule set Cross Fire of Irony and iron out the mistakes we made last time (RPGs were too powerful!). So we met up to refight the game, but swapped sides with me taking the Soviets and him the Afghan ambushers. 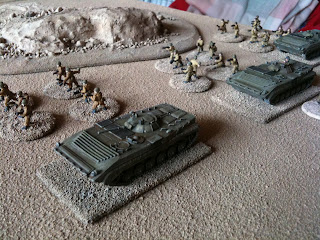 I had three sections of Soviet regulars, each complimented by an RPG and LMG and transported in three BMPs armed with HMGs. I had to get as many of this force off the table by heading down the valley and the Afghans had to stop this happening. 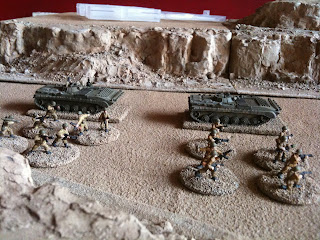 I dismounted the infantry as learning from the previous game, if a vehicle is knocked out all passengers are killed as well! I was being cautious as I knew the rocks were alive with Afghans! 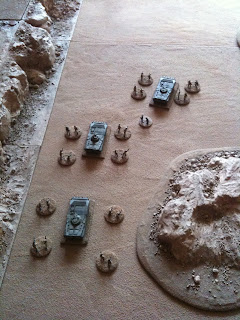 And it wasn't long before they started to make their presence known! Snipers appeared and began firing at the armoured column, causing suppression on some of the infantry. 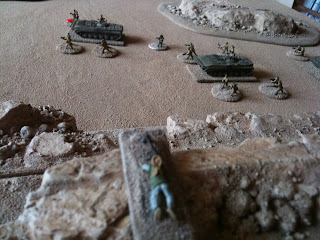 On both sides of the valley entrance Afghan forces were raining fire down! 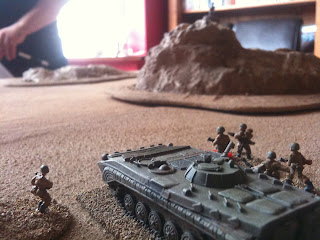 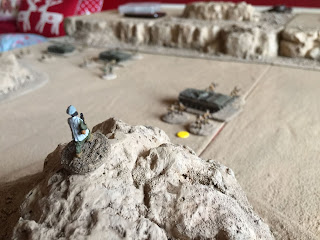 I was trying to push my sections forward, but sniper fire was interrupting the movement and slowing progress. Creeping forward, the infantry were making use of the BMP's armour and kept their heads down. 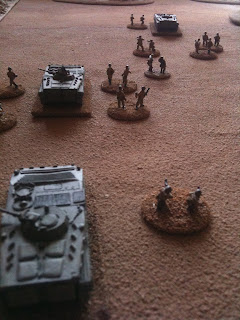 The only answer was to use a sledgehammer to crack a nut and the Soviet heavy firepower was useful in dislodging the Afghans. However, it was eating up my limited ammunition! 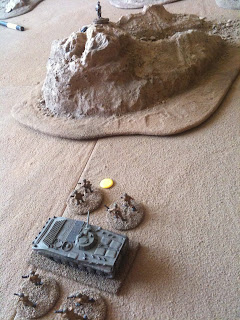 However, Afghan RPG units were in my rear and it was difficult for me to deal with them once they were behind the column. 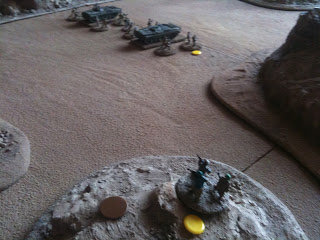 More and more Afghans seemed to be coming out of the rocks! The longer the Soviets stood still, the more ammunition they were using, so I needed to get moving. 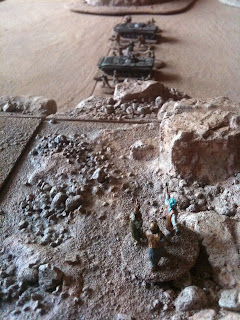 The Afghans rained down mortar fire on the column and although it didn't hurt the armoured vehicles it decimated the infantry and they were further shaken. More stalling! 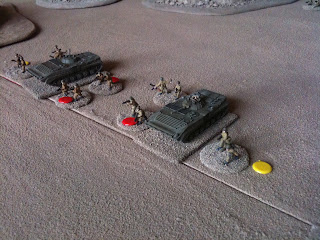 Even with the company commander killed by mortar fire, the Soviets recovered and began the advance once again. They had rounded the valley corner and the way forward now looked achievable. 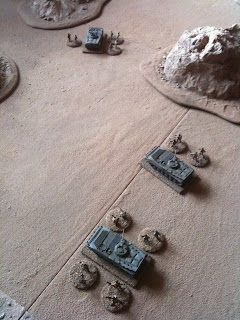 Unfortunately for me, this advance was also slowed by more mortar fire from the Afghans. Firing from previously hidden positions they caused even more casualties! 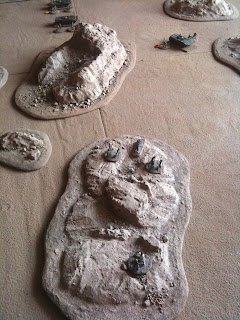 Suddenly even more Afghans appeared in the rocks, they were standing between the Soviets and home. 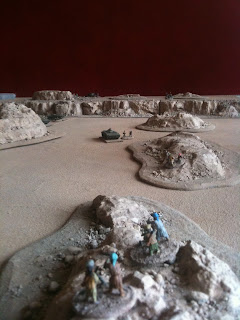 The Afghans opened fire with one of their RPGs which knocked out the weapons on the forward BMP. 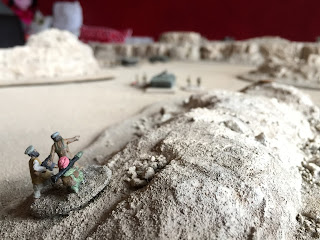 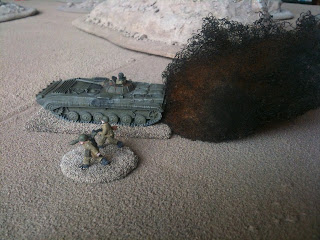 Meanwhile, the rear two Soviet units were still being held up by Afghans on the cliff tops. 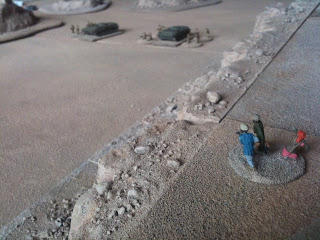 On my right flank, Afghans tried to get a good position over looking the column but came under a whithering fire from the Soviets. 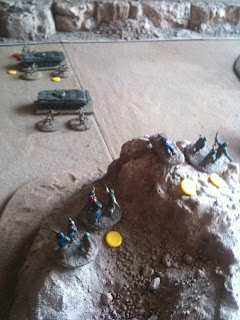 Once again, the Soviet firepower smashed the Afghans. Although it was costly in ammunition, I was breaking my way through their defence line. 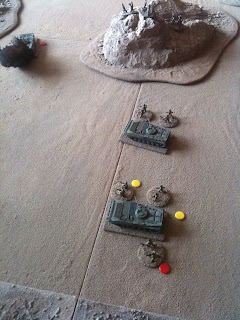 This gave me the break I had been waiting for and the two Soviet sections were able to get around the corner ready for the final run home. 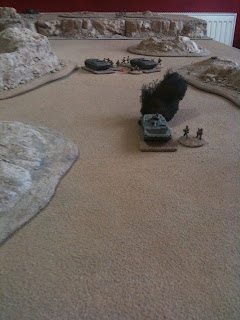 Afghan mortars were still waiting at the end of the valley though, so it wasn't plain sailing just yet. 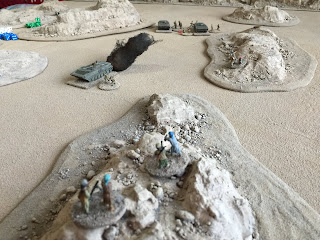 There was Afghans on both sides of the valley, but I was confident that I had enough to smash through. 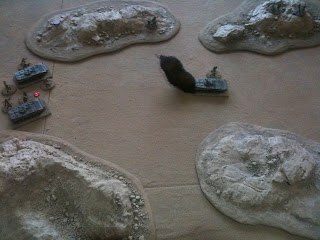 But, more Afghans appeared and again slowed the advance by firing mortars and killing most of the Soviet infantry. I was now teetering on the brink of disaster, if I lost one more base of infantry I would have reached my army break point and would have to retreat. 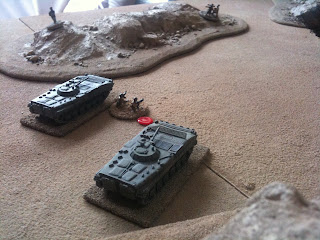 At the rear, Afghan troops appeared and began firing at the remaining Soviet soldiers. 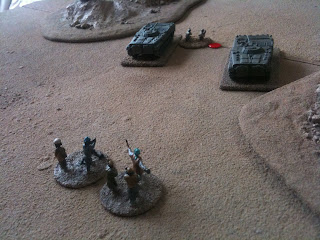 The final base of Soviet infantry was shot down and this broke my army, we then moved into the final phase of the game. All remaining units went into programmed movements, the Soviets were forced to begin moving off the table as soon as possible, whilst the Afghans tested to see if they would attack or disappear into the rocks again. 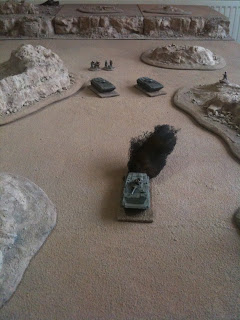 The Afghans failed their test and charged the remaining vehicles in a blood lust! 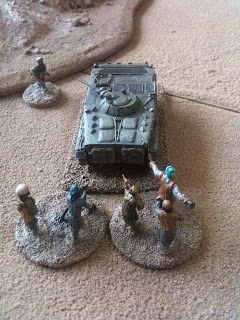 The front damaged vehicle was similarly attacked by the mortar crews who had now run out of ammunition. 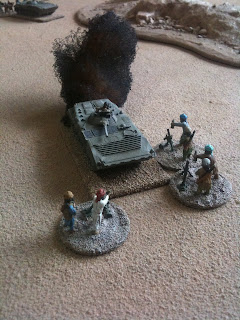 But, infantry attacking armoured vehicles only had one outcome and the Soviet vehicles were able to fend off the Afghans. 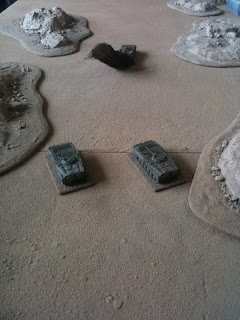 It was all over, the Soviets fled for the end of the valley and were declared the victors, even if it was a Pyrrhic victory. The Soviets had lost all their infantry, but so had the Afghans. Had the Afghans not failed their pursuit test they would have disappeared back into the landscape and it would have been a definite Afghan victory.

This was a more satisfying game than the previous Cross Fire of Irony games we have played, as more happened and the game switched between the two sides more fluidly. It was a tough slog and the BMPs were down to two shots left after all the heavy fighting. The Afghan mortars had also used up all their ammo but had done great damage in doing so. Hopefully, Ninjasaurus will publish these rules but until then, you'll have to rely on my AARs to see how they play!
Labels: 15mm AAR Afghan Cross Fire of Irony Modern Soviet