It was time to try out my 3mm forces for Rommel and on the bank holiday Monday, Ninjasaurus Rex and I met up to refight the opening actions of Operation Zitadelle, also known as the Battle of Kursk. The scenario was based loosely on the attack of the western edge of Von Manstein's assault on the Voronezh front on 5 July 1943. 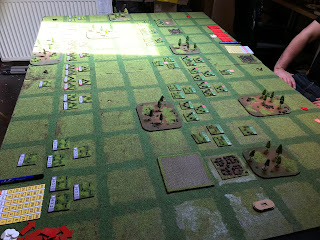 This is where, 3rd Panzer, Großdeutschland and 11th Panzer Divisions attacked towards the towns of Gertsovka, Cherkassoye and Butova (the three urban areas on the picture of the board above from top to bottom, respectively). The Germans had to capture two of the four objectives, along with holding on to the one that they began with, to win the game. The Soviet defence was concentrated around the objectives and I thought the best strategy was to create a spearhead with my armoured units and batter a way through to capture at least two of the objectives. 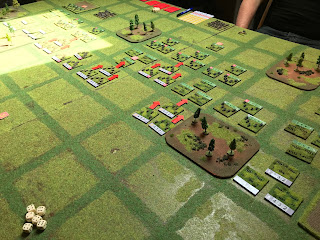 I was able to get straight into the action in the centre of the field, but as is always the case in Rommel, the first attacks were repulsed. It takes a while to grind down a defender, so this was no surprise to me. 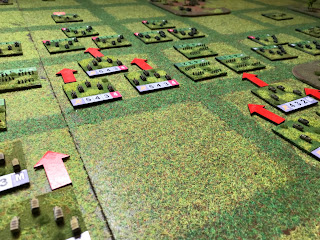 On my western flank, I drove hard against the town of Gertsovka using a combination of infantry and heavy armour in the form of Tigers! 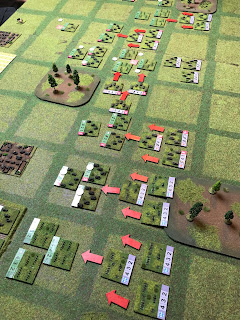 The Tigers clashed with T-34s on the outskirts of the village, but neither side would yield their positions. 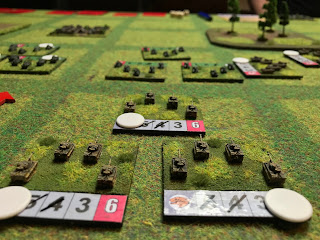 In the centre, opposite Cherkasskoye Panthers and Panzer IVs battered Soviet armour with support from motorised infantry. 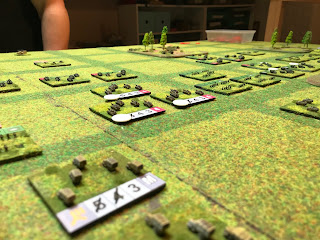 The Soviets threw up prepared positions around the centre objective which caused delays in the attack schedule. However, Soviet units were being pushed back by the Panzer IVs. 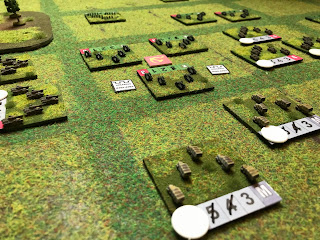 Inching forward at Cherkasskoye the Panzer IVs of 3rd Panzer Division closed in on a second objective, but the tenacious Soviet defence held on. 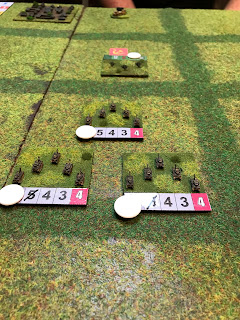 The Panthers attacked again and pushed the retreating Soviet armour away from the goal. Meanwhile, Panzer IVs and motorised infantry moved in against the objective outside Cherkasskoye. 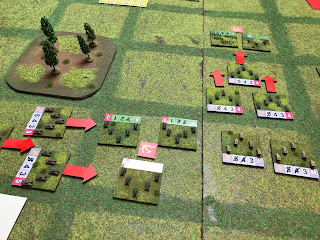 The battered Soviet defence line broke and the Panzer IVs moved in to capture the objective and threaten the Soviet supply line. 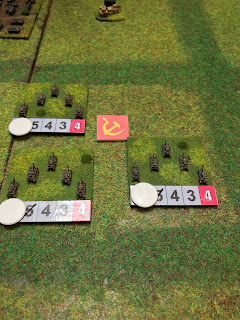 A Soviet counter attack was repulsed, but not without heavy loses on both sides. Despite two attempts, the Soviet armour and infantry couldn't dislodge the German tanks. 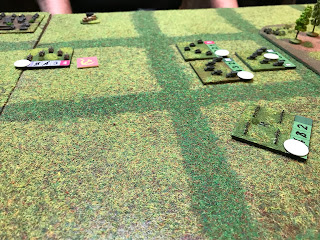 The Soviets also counter attacked the Panthers on the other objective, but failed to even cause a single casualty. 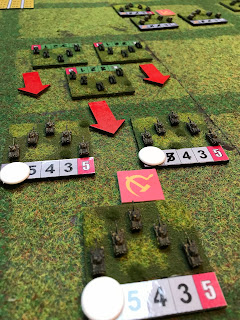 Meanwhile, on my right flank, the German infantry swept through the Soviet defences and stopped in front of Gertsovka. I was holding my Tigers back here as they had taken a massive amount of damage and were very fragile at this point. 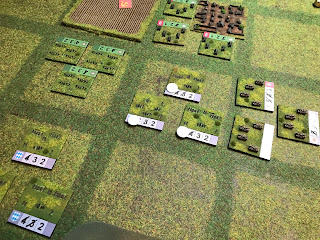 The Panthers quickly attacked the remaining T-34s opposite Cherkasskoye and destroyed them with a combination of firepower and artillery. This removed any threat to the objective. 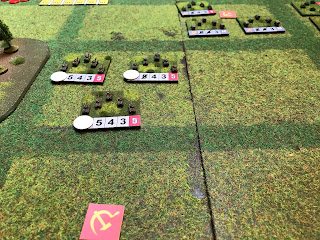 Soviet motorised infantry had arrived on the outskirts of the town and began their counter attacks against the German infantry and armour, supported by T-26s tanks. 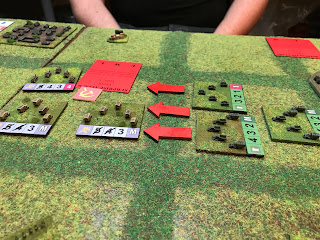 Reacting quickly, German vehicles sped to the rescue and caused huge casualties on the Soviet flanks, blunting their threat. 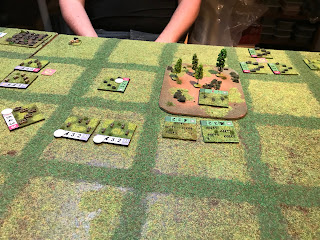 The heavy assaults from the combined arms of the German tanks and infantry were taking their toll on the Soviets. 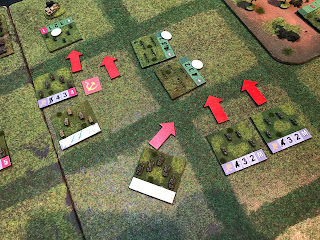 Over on the western flank, German infantry secured the third objective, however, the final Tiger attack was unsuccessful in removing the Soviet armour from Gertsovka. 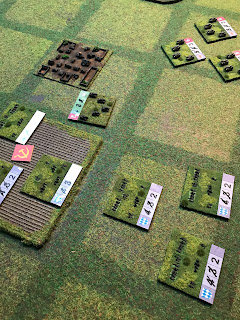 And on the eastern flank, the German infantry moved in to take the final and fourth objective, whilst the remaining Soviet armour was surrounded east of Cherkasskoye. 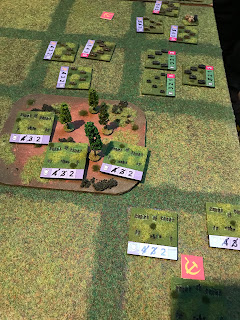 At this point, Ninjasaurus threw in the towel, with only a handful of armour units left and none at strength it was pointless to continue the carnage. The Germans had secured all five of the objectives and broken through the Soviet defences, just as happened historically. However, I had taken a heavy toll, especially on the Tigers, one more hit on each of these units and they would have disintegrated. As rare tanks they are not allowed to reorganise, so they cannot recover their damage!

Historically, Operation Zitadelle ran out of steam very quickly, despite a great start for the German attackers and it marked the turning point on the Eastern Front. Germany never regained the initiative and was on the backfoot all the way to Berlin in 1945. Information for this game came from the Osprey Campaign  Book Kursk 1943, which is a good and cheap introduction to this fascinating campaign.
Labels: 3mm AAR Artillery Germans Infantry Kursk Rommel Soviet Tanks WW2