Russian Villages for Rommel in 3mm

Pushing forward with my Rommel project in 3mm, I decided to add some scenery and as luck would have it, Brigade Models had just released their 3mm Russian villages. I have lots of Brigade Models' 3mm buildings that I use for Blucher, but these are western Europe in style and work fine for Belgium in the 19th Century, but not for the steppes of Mother Russia. 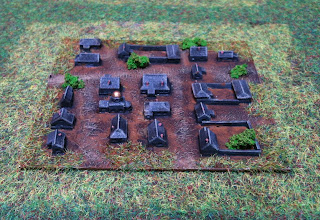 I cut out three bases of 3.5" squares of 1mm Plasticard and created each village from a pack each of the houses and barns. I added coffee stirrers split in half as fences to break up the shape of each village and add some interest. I didn't put too many fences in, as many of the pictures of Russian villages that I have seen show they didn't use as many fences as in the west. Using flock to break up the edges, I also added clump foliage as trees and bushes. 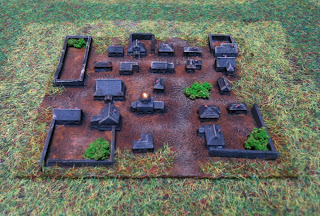 These can easily be used in Blucher for rural settlements as a lot of structures in the 19th century would be made from wood the further away from the cities you go. The only slight issue being the onion-domed wooden church in the centre of each settlement, but plenty of villages have small churches in them, so it's not a big factor. 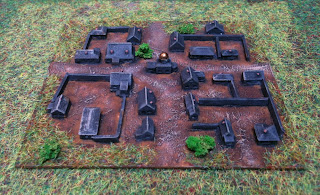 I bought enough houses to make three villages, which should be enough for now, I can always expand later should I feel the need. To give you a sense of how big they are, you can see three bases of 3mm T-34s in the picture below to give you an idea: 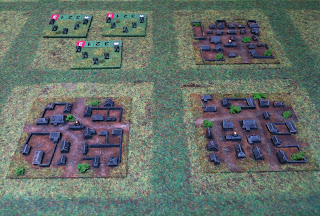 These didn't take me very long to create and I am pleased with how they turned out, it's good to have scenery that matches the size and scale of the Rommel games and best of all they were cheap!
Labels: 3mm Blucher Rommel Russia scenery Terrain WW2