I recently got back from seeing my wife in Vienna (she's works as a researcher there) and I thought I'd show you some of the pictures from the trip, along with a short round up of gaming opportunities in the city. We spent two weeks using her flat as a base for a holiday and we took the chance to visit Wagram, the scene of the French and Austrian Battle of 1809. Napoleon's victory here broke up the fifth coalition of Britain and Austria. 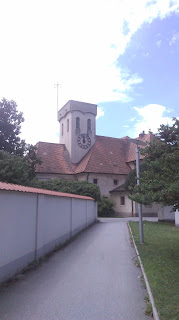 The present day town (actually called Deutsch-Wagram) is a small place about an hour away from Vienna on the train. A short walk from the station brings you to the lovely little church (above) which was sacked by French soldiers during the night of 5/6th June 1809. Close by is this commemoration stone describing the battle. 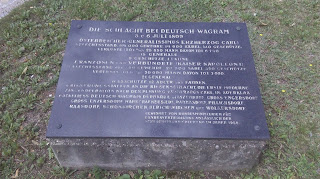 And a very short distance along the original main road is this memorial to the battle set in a small park. 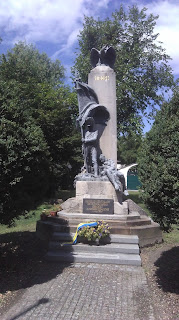 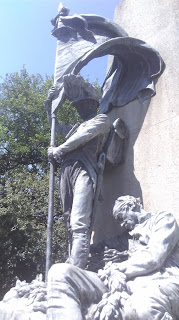 Back near the church was this small plaque dedicated to Napoleon and, I assume, a house he stayed in. 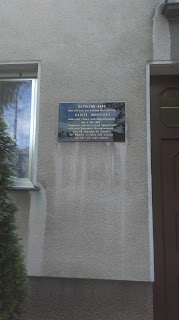 Further down the street is the HQ of Archduke Charles during the battle. 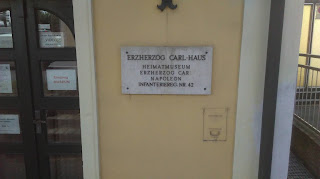 It currently houses the museum of the battle, but unfortunately, only opens on Sundays and Public Holidays (unlike everywhere else in Vienna...). 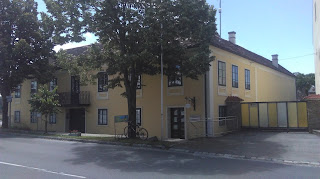 I was unable to get into the museum, but images of the battle are everywhere, like this mural on the side of the building. 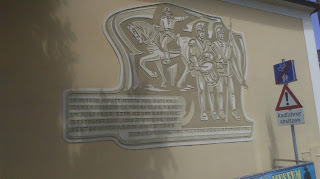 There is also a walk of about seven kilometres that takes in various points of the battle and follows the canal on the edge of the town. at the start of the walk is this excellent map of the town in 1822, not long after the battle, which gives you some idea of how small the place was. 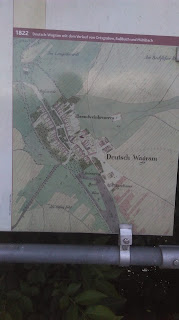 We were unprepared for a long walk, with the blazing sun, so we meandered along the canal for a short while until I found this perfect photo opportunity: 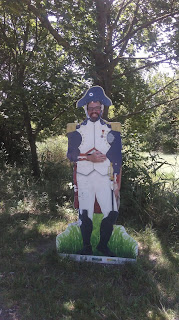 Interestingly, there have been some recent excavations at Wagram, recovering the remains of some of the soldiers involved in the fighting. Read about it HERE. I intend on revisiting Wagram, on a Sunday, and walking the length of the battle lines, but that is something for the future.

Back in the city, I was also able to visit the Soviet War Memorial, commemorating the capture of Vienna in April 1945. Nobody quite does war memorials like the Soviets... 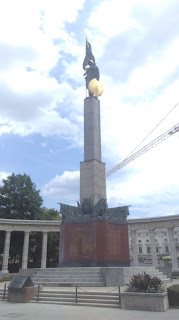 The nerd didn't end there, one evening my wife and I called in at Brot Und Spiele, a lovely, welcoming board game bar, where the games are literally piled up: 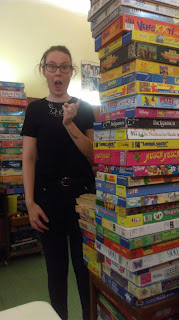 Unfortunately (for us), most of the games are in German, but there was plenty there that we knew the rules to, Carcassonne, Ticket To Ride, etc, so we had an enjoyable couple of hours drinking beer, eating toasted cheese sandwiches and playing games! It is really recommended if you are visiting the city, although it's a little off the beaten track, it is close to the U2 stop at Taborstraße.

Sticking with gaming, I was able to visit a couple of games shops in Vienna as well, the first was Planet Harry, located at Otto-Bauer-Gasse 19/1 in the main shopping district. This has a great selection of board games and many RPGs as well. It's a little small, but very well stocked and they have plenty of English language versions as well (great for us!).

Just down the road is Spielraum, which is your go to place for CCGs like Magic: The Gathering and Pokemon.  Further along the main drag at Mariahilfer Str. 23-25 is the excellent Damage Unlimited Games Centre. This is packed with loads of brand new board games and a room full of second-hand games, everything from family games to wargames, all at reasonable prices. Upstairs is miniatures and LARPing gear! All under one roof!

Even if you are only in Vienna for a short while, it is worth while checking out the places above.