As we have been playing a few tester games of Star Wars Legion, I thought I needed some large scale sci-fi terrain and scatter scenery. The first was some scratch built cargo crates for use as barricades. Dean had given me some small wooden blocks that he had picked up cheap in The Works. I literally just stuck some embossed Plasticard on the outside, added some edging and that was it! A very simple but effective job and I will be making some more of these in the future. 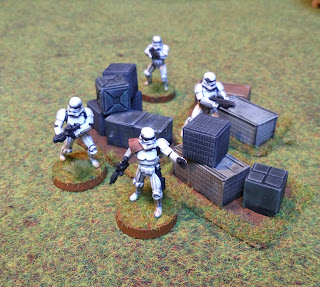 Next up, I painted the barricades that come with the core box. You can now buy these as an additional set for games. I'm not massively keen on them, they feel a bit chunky to me, but they are nicely detailed and a quick paint job, wash and dry brush later and they were finished! 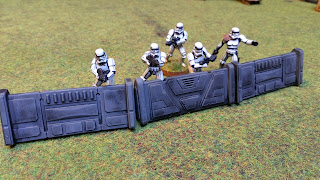 Then I turned to Ground Zero Games and their newly released crates and ammo boxes sets. These had been designed on a 3D CAD package, 3D printed then cast as metal pieces. And you can really tell. Lots of sharp detail and nice touches. Painting these was also a doddle, and they add more scatter terrain to games: 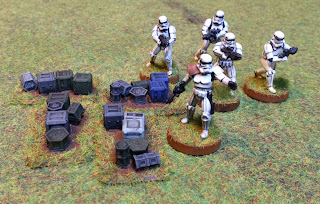 The last bits I bought came from the Troll Trader Combat systems. They produce a big range of MDF scenery and some of it made with Legion in mind. These 'Sandstorm Barricades' were as cheap as chips and look excellent. I will certainly be buying more of these in the future. 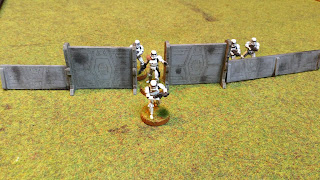 TTCombat also produce this set of resin Junkyard Terrain. These are excellent and really crisp moulds. I mounted mine on large bases, but they could easily be left as they are once painted. 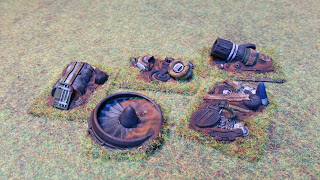 So, I have collected quite a bit of scenery, some of it will be used as cover, some as rough terrain, but it all looks great on the table.

In gaming news, Ian Brody's Quartermaster General: The Cold War has just gone live on Kickstarter.  This is the latest release in Plastic Soldier Company's line of board games and the fourth QMG game. Click HERE to back this project. I am big fan of the original QMG and the follow-on QMG: 1914, they are card driven grand strategy games, that play fast and are a lot of fun, so I am expecting this will be along the same lines!
Labels: Legion Product review scenery Science Fiction scratch-building Star Wars Terrain