I Am Your Father... A Star Wars Legion AAR

Dean and Ninjasaurus called over and we had another game of Star Wars Legion. This time, we doubled the size of the table, added heavy weapons to the squads and added in character specific command cards.

Luke Skywalker and a small band of Rebels held a landing pad in the centre of the table (there will be a future post about this landing pad specifically), complete with barricades, with an AT-RT reinforcement arriving in turn three. Whilst the Imperials were led by Darth Vader and General Veers, along with two squads of Stormtroopers and speederbikes. The scene was set for a classic confrontation. Here are a few photos from the game: 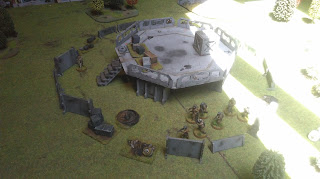 Immediately, the speederbikes made headway towards the Rebel positions, but came under accurate blaster fire very quickly. 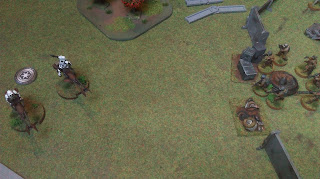 Things were not going so well on the other side of the landing pad either; the Stormtroopers were literally shot to pieces as they advanced. 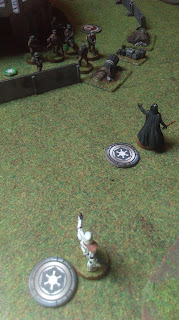 However, Vader attacked the Rebels and decimated the squad with his lightsaber, but they were able to loose off a few shots and wound him. On the other side of the table, the Stormtroopers blasted their way through the Rebel defence line, whilst Luke hunkered down on the landing pad. 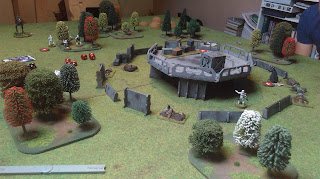 Climbing up the landing pad side, Vader took another wound, but was now in a position to attack Luke. But Luke was waiting for him! 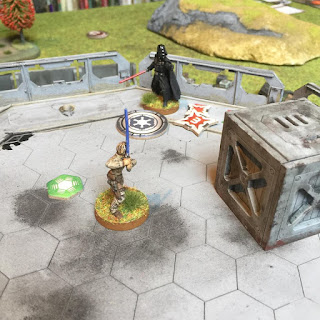 Using his special ability to charge and attack, Luke was able to get two attacks in on Vader, both of which landed blows and killed him! 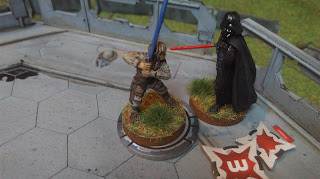 The son was triumphant, and he then quickly dispatched the remaining stormtrooper to seal the Empire's fate! 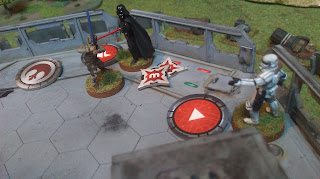 The Imperials had managed to get onto the landing pad, but were quickly knocked off it again, so the Rebels won the day!

As this was the second game of Legion, I wanted to add more flavour to it and the extra cards and heavy weapons really added another dimension to the game play. As Dean is familiar with X-Wing and some of the mechanics are also similar here, it didn't take him long to pick up the game and we all agreed how enjoyable it is. It moves fast, there is a good amount of decision making and you can be tactical as well.

The only issue I have at the moment, is the small amount of figures I have. However, I do have a lot of 15mm Star Wars stand-ins which I might dust off to play a bigger game whilst I collect more of the larger sized figures. More units will make for more tactical decisions and the rules for suppression and other bits and pieces will become more apparent, I think.

All in all though another great game of the excellent Legion!

Also, I have started a Facebook Page for this blog, please give me a like HERE.
Labels: AAR Imperial Imperial Stormtroopers Legion Rebels Star Wars