Ex-Joan of Arc, an Operation Nightingale Excavation at Bullecourt in France

I have just returned from two weeks in France, where I have been working at Bullecourt south of Arras, for a second time exploring the archaeological remains of the Battle of Bullecourt which took place in April 1917. The excavation was an Operation Nightingale project and was supported by Breaking Ground Heritage, with wounded, injured and sick veterans as the participants. Last year, we found the remains of the Mark II Tank 796, commanded by Lieutenant Skinner. The tank 796 made it as far as the German Hindenburg Line before being disabled, whilst supporting the Australian attack on the defended village. 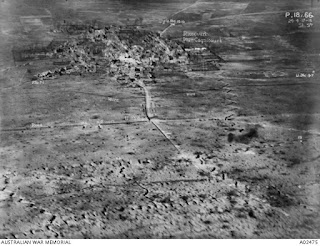 Previously, we found the tank track and the remains of two German soldiers but had very little time to explore the archaeology further. This year the project design called for a wider area to be explored, which would hopefully give us a greater understanding of the archaeological feature that the German soldiers were found in and to see if we could locate more of 796.

Almost as soon as we had stripped the top soil of the site we started locating pieces of smashed tank. 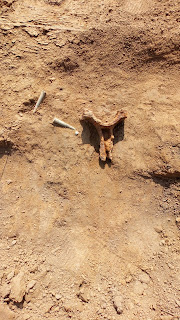 Another piece of drive chain from the engine. 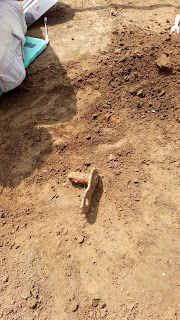 A gearing cog, in great condition! 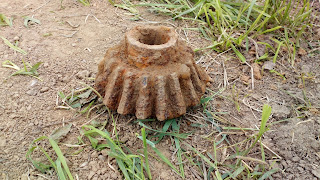 Last year we had also unearthed some German Elephant Iron and we were able to have a look underneath it this year. 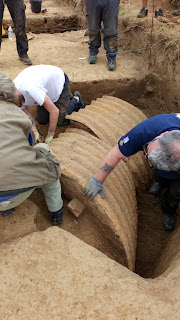 Sat directly below the Elephant Iron was another massive engine cog from the tank! 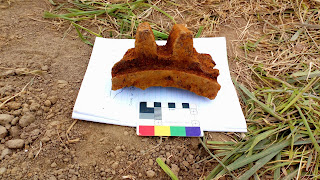 This year we also had a multinational team, with participants from Britain, Australia, Germany and France. This gave us a very fortunate occasion to be able to raise a toast to the German soldiers that had been recovered. This was led by Jan, a German veteran, who gave a speech in German to the fallen. A very moving experience. 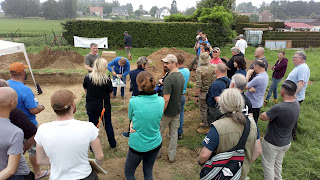 Also, part of the itinerary included visiting Deborah in her new specially built museum. This also gave us a chance to compare some of the artefacts we had recovered with an almost intact example! Although Deborah is a Mark IV... 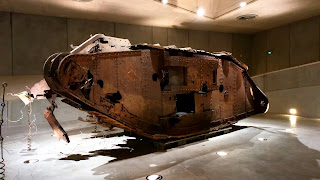 And Thierry, the farmer who owns the pasture field, took us over to his farm to show us the track that we recovered last year. He'd cleaned it up and it looked spectacular. 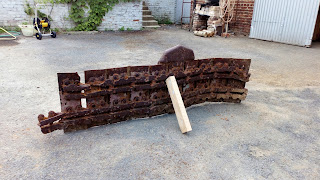 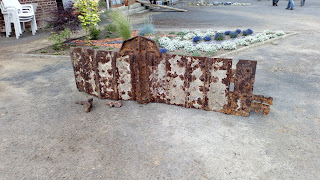 Of all the finds, however, the best one was this cartridge from a 6lber Naval Shell, which was the main armament of 796. It had been fired at the enemy during the attack on the Hindenburg Line! Not only that, but the headstamp was dated to 1917! Shell cartridges are extremely rare battlefield finds as they are usually left with the artillery positions and not in the front lines, so it was incredible to find this one! 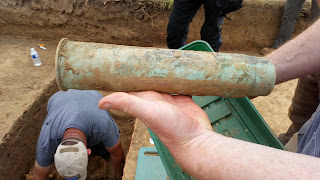 I am waiting for our excellent photographer, Harvey Mills to release his official site photos, but hopefully these few have wetted your appetites for now! I'll link his pictures on this blog when they are ready, but in the meantime, please like and follow Operation Nightingale on Facebook HERE and Breaking Ground Heritage on Facebook HERE, both of whom do fantastic work with wounded, injured and sick veterans.
Labels: archaeology Breaking Ground Heritage Bullecourt France Operation Nightingale Tanks WW1