This is the penultimate brigade for the the Allied Reserve Corps for the seemingly endless 100 Days Campaign project. It's the 4th Hanoverian Brigade, who were attached to the 6th Division and commanded by Colonel C. Best. 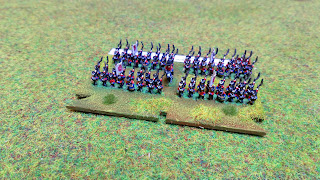 The unit was made up of the city battalions of Verden, Lüneburg, Munden and Osterrode, all of which were Landwehr units, making them conscript in the Blucher rules. As there is very little detail on the flags of these units, I re-used the ones I have been using for my other Hanoverian Brigades. 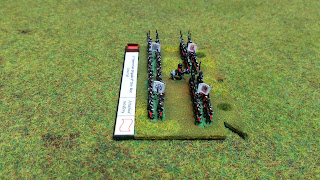 The unit was part of 6th Division, during the 100 Days Campaign, but was attached to 5th Division under Picton during the Battle of Waterloo. They were deployed on the Allied left which was of not much concern to Wellington and they saw little action during the battle. However, the Verden battalion was badly mauled at Quatre-Bras by French cavalry when they were slow to form square. 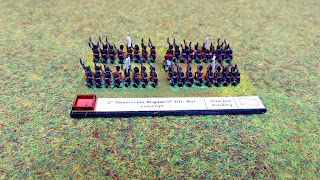 Another unit is finished and with it only one final British brigade of infantry left for the Anglo-Allied side. Then I have the Cavalry Corps to complete, but, as always that is for the future! And don't forget that today is the anniversary of the Battle of Waterloo, 'a damn close-run thing'. 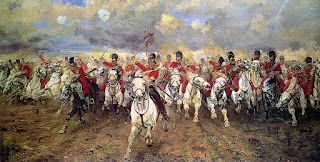 The information about the Brigade was drawn from Mark Adkin's Waterloo Companion. The link will take you through to the book on Amazon and goes through my Amazon Associates link.
Labels: 6mm Baccus Blucher Napoleonics Waterloo Wellington