As you may know, recently I bought a copy of the core box of Star Wars Legion. It comes with some figures to get you started, a force (excuse the pun) of Stormtroopers and a force of Rebels. So I set to work painting them.
There are 14 Stormtrooper infantry figures and they were very easy to paint, with the use of white spray paint... Here they all are:

The Rebels took a little longer as they have a camo suit and a few more colours than just black and white! However, I finished them all of in good time. 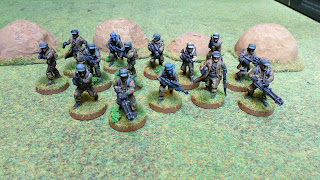 You may notice in the back of the picture of the Rebels the scenery that I also created recently specifically for Star Wars Legion. I have had a few bits and pieces kicking around for a few years, so I thought I'd get to using them. I was given a couple of packaging supports by Dean, a few years ago and these are perfect as a small Star Wars style hut. I also had some polystyrene balls left over from making a Star Wars shield generator a long time ago. I used bits of the balls to make an entrance for the huts, but I also used the left overs and mounted them on some vinyl tile. 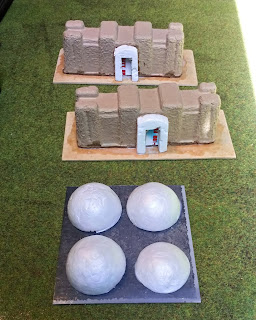 I gave the polystyrene balls a covering of Pollyfilla and sprayed them. However, the covering wasn't complete and some of the polystyrene melted slightly under the spray. But, faint heart ne'r won fair maid and all that, so, I have decided that these are some form of alien creature's nest, like an ant's nest or termite mound. The three that melted are ones that have gone out of use, whilst the smoother one is still in use. 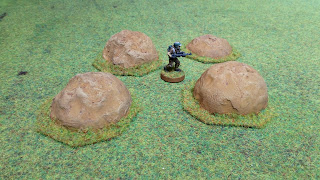 And the huts were dead easy to finish, they just needed painting, basing and weathering really. These work well as junker huts or some native huts of an alien planet. 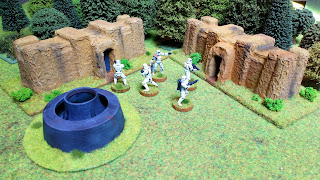 See? It's always worth hanging on to bits and pieces that most people would throw away...

Some of the links above go through to my Amazon Associates account and if you buy something through them I get a cut of the sale!