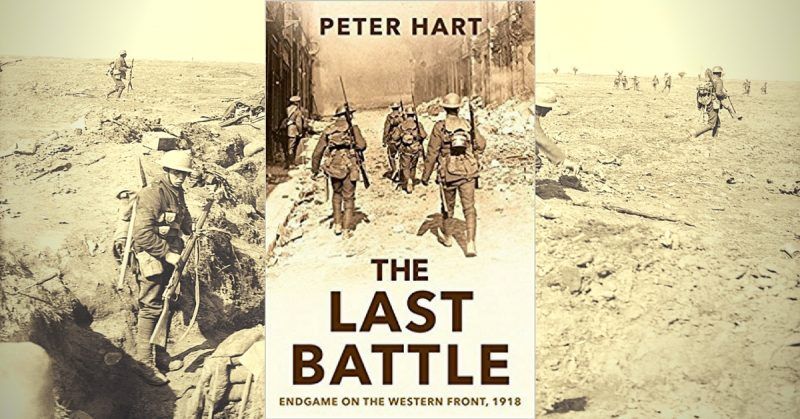 Given the belter of a Bank Holiday we've just had, I took the chance to read Peter Hart's latest book: The Last Battle: Endgame on the Western Front, 1918 and as I was given a review copy of it, I thought I had better review it!

The histories of the last year of the First World War generally are preoccupied with the German Spring Offensives and if they do explore beyond this, it is usually an examination of the Battle of Amiens (8th August) which ushered in the final act of the war leading to the Armistice in November. The works that do concentrate on the final months of the war (Jonathan Boff's Winning and Losing on the Western Front (Cambridge Military Histories)

, for example) are detailed academic approaches. Not that there is anything wrong with this, but on occasion, they can make for dry reading. Peter Hart (the Imperial War Museum's oral historian) takes an extremely complicated period of the war from September through to November and ably distills the information into a very readable account in The Last Battle: Endgame on the Western Front, 1918.
The first portion of the book are given over to a background to the fighting that continued long after the 8th of August, including the political standpoint of the Allies, with their need for a concerted effort to finally knock Germany out of the war (spoiler: the Allies win!). The largest section of the study moves into the frenetic operations that typified the fighting in late 1918, each large set piece is examined in some detail, but with no loss of readability. This is where Hart's writing really shines through, he is able to take the strategic view and place it alongside the view of the men at the sharp end of the fighting with no loss of readability. Numerous quotes from British, Australian, Canadian, French, American and German sources give a full picture of what each army faced and how they overcame the problems facing them.

The war in 1918 was a world away from the one that had started in 1914, and Endgame demonstrates this by examining the changes in tactics, not only of the infantry, but the aircraft, artillery and the use of tanks in an all-arms combination that proved the modern era of warfare had truly arrived. For anyone seeking the old myths of futility this book is not the place to find it! Hart's revisionist approach is eye-opening and up to the rigours of modern First World War interpretation. I thoroughly recommend it.

If you are interested in buying this book, please use the link below which goes through my Amazon Associates profile:

The Last Battle: Endgame on the Western Front, 1918