Another British unit that I was able to finish over the long Bank Holiday weekend recently was the 10th Brigade of the British 6th Division. This was one half of a mixed British/Hanoverian Division (the 4th Hanoverian) and was commanded by Major-General Sir John Lambert. 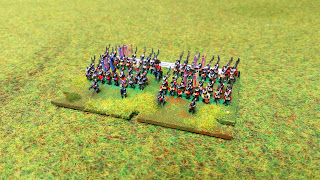 The unit was composed of the 1/4th Foot, 1/27th Foot, 1/40th Foot and the 2/81st Foot. The latter was left in Brussels in during the campaign, but I have included them here as part of the Brigade's strength. 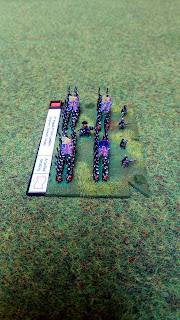 This unit had an interesting story, they had recently arrived from America to join the Allied army for the campaign. They arrived on the field at Waterloo at 10.30am and were held in reserve near Mont St Jean. Lambert had assumed command of the Divison as Cole the original commander was on his honeymoon! 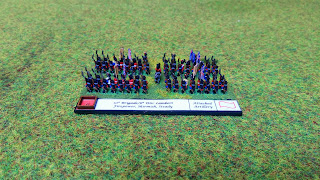 Another part of the Allied Reserve Corps has now been finished and with a handful of units left the end is in sight! As I said before, all the information that I am using for building this project has mostly come from the excellent website Cent Jours, although it is in French (I don't speak it) it is a wealth of information on the uniforms of the Waterloo campaign. I am also using Mark Adkin's excellent The Waterloo Companion

. This is packed full of information mainly about Waterloo, but has plenty about the whole campaign as well.

That link goes through to my Amazon Associates account and anything bought either there or after clicking it will net me a little reward, so if you are buying anything off Amazon can I ask that you do it through that link? You'll be supporting this blog if you do!