I got back on the horse with the Waterloo project after buying the Allied Reserve Corps from Baccus. I had already done the Nassau (reserve) Brigade from this Corps, so I tackled the first British brigade, namely 8th Brigade under Major-General Sir James Kempt.
This is the first unit I have completed with a Scottish battalion in, the 1/79th. These soldiers have kilts so it was a nice to change to paint green instead of grey on their legs! I wasn't going to do the indivual stripes that make up the kilt patterns though... 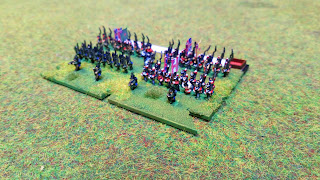 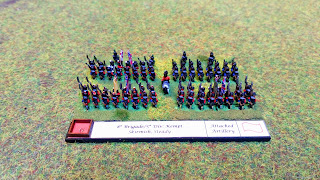 This is a very typical British brigde, with 6 Elan and the Steady and Skirmisher traits. Kempt was wounded during the Battle of Waterloo and the 5th Division took heavy casualties from the French grand battery as it was spread thinly over nearly a mile on the left centre of the Allied line. 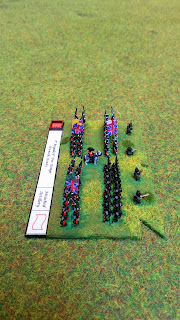 The reserve Corps is a bit smaller than the other units so far, so it may not take very long to complete.