Ever since played a couple of games of Rommel, I have been toying with the idea of attemtping it in 6mm. 6mm fits perfectly, given the high command level of the game and means that we can have a lot more tanks on the board than possible with 15mm!
It does feel a little like doubling up on the vast amount of Second World War gear that I have, but I will try and focus more, building historical formations rather than just buying a wide range of vehicles. It is something that I am going to be working on in the future, but in the short term, I wanted to check out some of the ranges out there. I had a  look at Heroics and Ros' massive range of vehicles and their price was good as well at about 55p a piece. It had been years since I last saw any H&R minis in the flesh, I used to have a massive collection of WW2 Germans and Soviets, but sold them about fifteen years ago, so I ordered a small order. First up was these four SDKFZ 251/B: 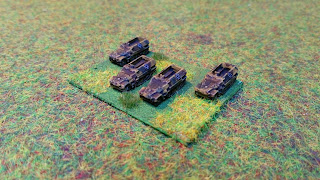 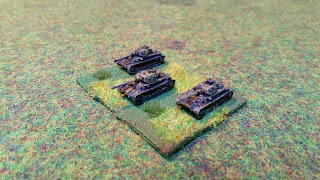 I was very surprised at the good detail on the vehicles, better than I remembered. Not as good as GHQ's 1/285th scale tanks, but perfect for wargaming distance. They painted up easily an quickly, the small scaledoesn't need a massive amount of work, which will also help with this new project. 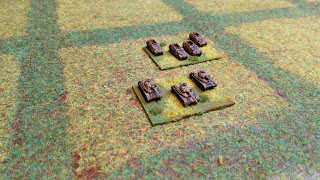 As you can see, I mounted the vehicles on a 2 x 1.5 inch base of plasticard to see how they fitted. It is a good size and allows for three bases to easily sit within a 6 inch square (which Rommel uses). I also used this test as a chance to work out how to label the bases. If I make label bases that are half an inch wide by two inches long they would fit nicely on a 2 x 2 base with the vehicles. The plan is to laminate the labels so they can be drawn on with a dry wipe pen. The good thing with the Germans is that each division had a symbol, in this case it is the 3rd Panzer Division and this is displayed on the base label so we can see the parent organisation at a glance. 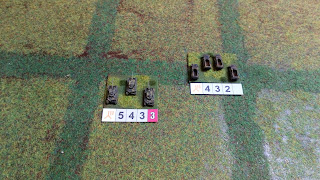 I chose the 3rd Panzer Division as they fought at Kursk and also had an active part in the invasion of Soviet Russia, so were perfect as my first mid-war formation. Check back on the blog with my progress with this new project of mine!