About a decade ago, Ninjasaurus Rex stumbled across the Italeri Berlin House Set

model kit in a shop, for a decent price and being a decent fellow, bought it for me. The idea being I would make it and then we'd both get to use it in games anyway.
The kit is 1/72nd scale, but I raised the ground floor interior to make it more suitable for 15mm. I also cut down the small shed on top and filled the interior walls with pollyfilla to make them solid. Then... I put it down for about ten years...

Until this weekend! As I am a bit broke at the moment, I am not having any new lead coming in so I figured I may as well make a dent on the pile of scenery I have had sitting about for a while, including this kit. I dragged it out of storage, brushed off all the dust (there was a lot), resprayed it grey as a primer and started to block in the colours: 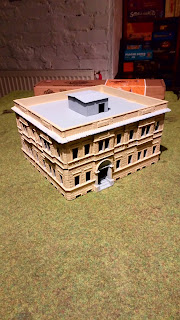 It was a simple enough job and it surprised me how quickly I had the basic exterior finished (if only I'd done this ten years ago...). To give you an idea of the size of this kit, here it is with a 15mm Panzer IV. 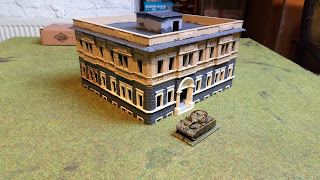 I painted the ground floor in grey and the upper floor in a yellowish render, then the fittings around the buildings were painted in a sandy colour. So far, so good. 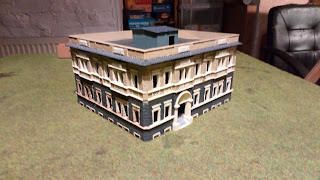 Then I turned to the interior, I block painted the walls of the rooms, the door frames and floor. I wasn't so bothered about being neat as the building will be weathered later anyway. 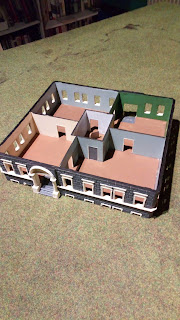 There's more to come with this building, so stay tuned for more updates later! Just in time for the 74th anniversary of the German surrender at Stalingrad. 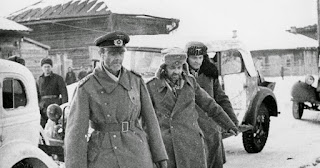