With work having settled down a little, I was able to crack on with the 1/48th Fokker Triplane that I had begun before Christmas. I moved onto painting what I had done so far and as I am following the colour scheme of Lt Friedrich Kempf, I was still working out how to do the streaked paint effect.
First, I painted the plane in Light Blue, followed by a overcoat of thinned down and roughly painted Olive Brown. However, this didn't give me the effect I was after, so I roughly brushed over this with Violet Brown. 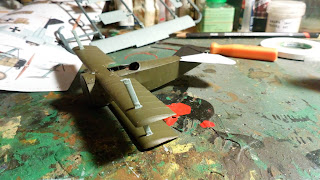 That still wasn't perfect, so I took some Yellow Ochre and gave it a very light dry brush to get the desired effect. Pleased with the streaking effect, the next step was to add the fuselage and middle wing decals. 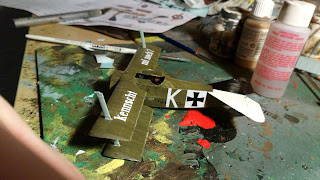 I built the engine, added that and fixed on the top wings. At this point I also built the undercarriage assembly and machine guns. 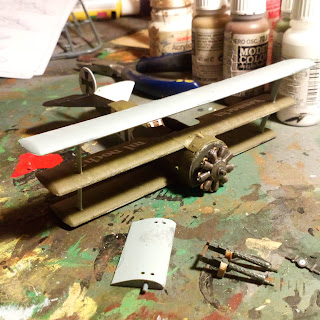 Then it was a case of painting the top wings as above and adding the big KEMPF decal and other markings. 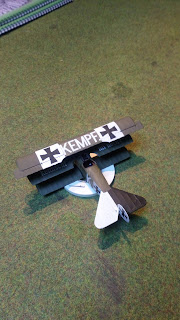 It had taken a while to get to this point, but the end was now in sight! Keep tuned for further updates and thanks for reading!
Labels: 1/48th Aircraft Model kits WW1