Spring chicken to shitehawk in one easy lesson

Over the last week or so, I painted the aircraft that came with the Plastic Soldier Company's new Battle of Britain game. it took longer than expected as I ordered some BoB decals from Dom's Decals over a month ago, but as Dom has been in absentia for a while, I waited as long as I could and found some on EBay instead.
I already had a bunch of German crosses so that was a start, but all the numbers came from a set of Bf-109 specific decals. The numbers are all made up, but I like the look of them: 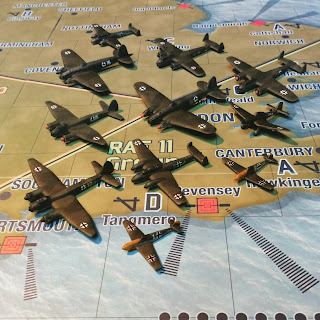 The British, on the other hand, are specific units. The Hurricanes are the 303 squadron, which was a Polish squadron (and amusingly, one of the 303 sqn Spitfires was mistakenly used as a advert for the Far-Right British National Party against immigration!). The Spitfires are from 19th Squadron. The decals are slightly too big as they seem to be 1/285th scale rather than 1/300th, but that just means you can see them better! 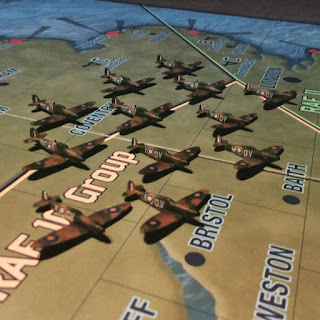 Unfortunately, I didn't have enough decals to do the extra three British aircraft, so they will have to wait a while longer. My painting was pretty rough and ready, as I did these quickly, but the decals bring everything together so it's not so noticeable. They certainly look a damn sight better than the horrible green and grey that they started in! As PSC are sending out a new set of aircraft as a lot of people complained about these, it means I'll have loads of 1/300th aircraft for BoB dogfighting!