On Saturda, Ninjasaurus and Dean called over for a tester game of Rommel. I had tried it out solo, but it would their first game of it. With this in mind, we used the same forces I had previously (100 points of Soviets and Germans), but I took the Germans as they had fewer individual units and they split their command between themselves.
We divided our forces in half as per the scenario and left half off the board as reinforcements.

I also took the first turn to show how a full turn worked and edged my Panzers down the left flank. The infantry plodded along on the right. 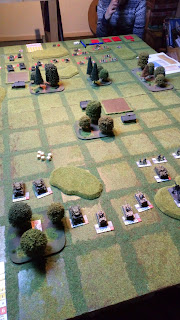 The Soviets moved forward, taking control of the small village and also digging in on their left flank. I used a surprise attack event card to attack the village. I knew this wouldn't dislodge the defenders, but it caused some damage and as Rommel is all about attrition it was still useful. 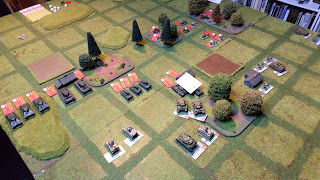 The attack came to nothing and my Panzer IVs withdrew. 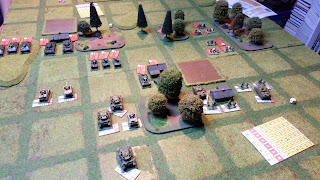 However, I used a second tactical move to relaunch the attack with fresh Panzers and infantry. Rather than lose two tank units, the Soviets withdrew and this allowed me to capture the village. 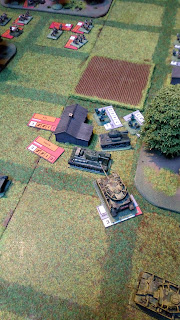 Meanwhile on my right flak I was closing in on the dug in Soviet infantry. I knew from experience that getting infantry out of prepared positions was a costly business. But my presence was enough to threaten them at this point. 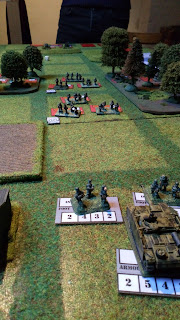 Over on the left flank, the Soviet tanks launched their attacks, the T-26s piled into the village and my Marders faced off against KV-1s and T-34s! The latter using a surprise attack which blunted my defence. 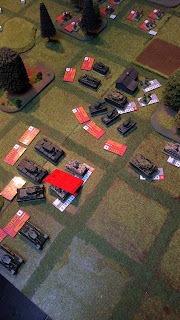 Thankfully, my defence remained intact and I was able to withdraw the Marders to lick their wounds. 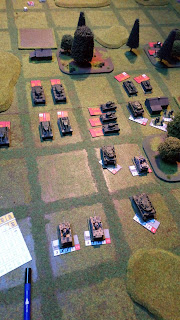 By counter attacking, a unit of StuGs and two infantry battalions wiped out their T-34 and T-26 that had previously been damaged. On my right flank, I had halted in front of the prepared positions. I was waiting for my reinforcements to arrive to help swing the situation. 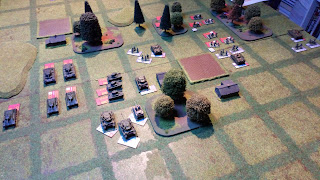 The fighting between the tanks was intensifying as the Soviets attacked again but with no favourable advantage. 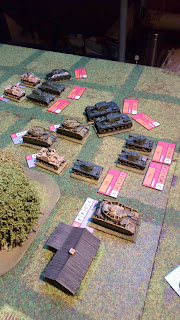 Just in the nick of time my reinforcements arrived on the table, this meant three fresh units of StuGs were able to bolster my damaged Panzers. 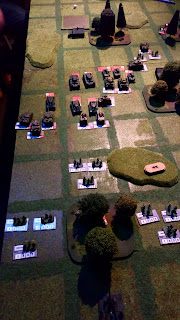 This caused more damage to the Soviets and also destroyed a unit on the extreme left flank. 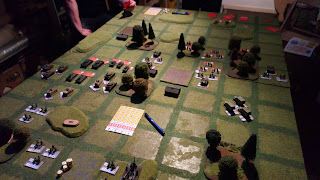 By this stage, even though a single Panzer IV was faced off by two T-26s and a KV-1, I still had the advantage! 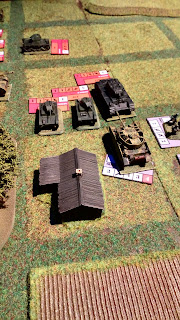 I pushed everything I had into another attack on the Soviet vehicles... 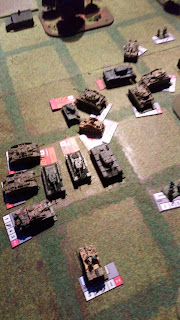 And they collapsed under the weight of of the combined StuGs and Panzers. After many turns of heavy fighting, the balance had swung to me. 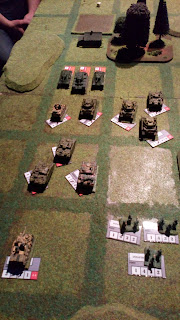 With the fresh reinforcements adding to my weight, I attacked on the right flank, but this was always going to prove difficult to win. 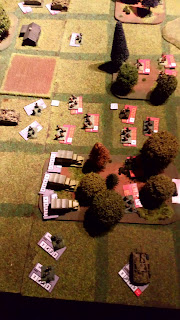 Meanwhile in the centre, my previously successful StuG and infantry support were wiped out by attacking Soviet infantry. The overall advance had been blocked, despite me causing a lot of causalities on their vehicles. 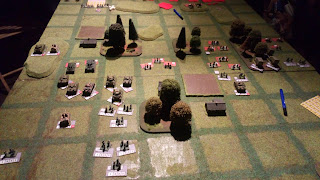 Another armoured assault proved indecisive as the remaining KV-1 and T-34 fought off an attack by StuGs. 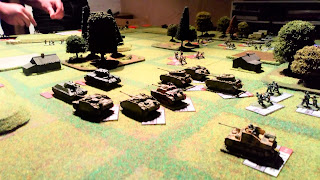 It wasn't to last though, another attack on the village cleared it out and the final Russian tanks were destroyed. However, their reinforcements had just arrived. Suddenly the back end of the table looked very full! 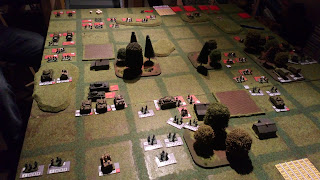 I had cleared the centre of Russian tanks, but now was facing a large number of fresh infantry. 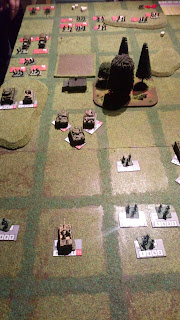 The Soviet infantry in the prepared positions leapt forward in the attack and smashed a StuG and infantry battalion. 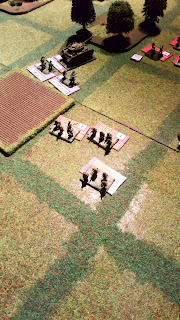 We ended the game there, on the tenth turn. The game was set to finish on the twelfth turn anyway and we figured neither of us would have been able to capture the objectives within that time. 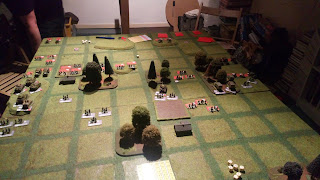 It was a draw, with two objectives held by both sides. However, the Germans had destroyed about fifteen Soviet units to a loss of about ten. This just showed that although there were far less German units to start with, they were more than capable of holding their own in the game and tore huge holes in the Soviet defences. The German tanks in particular did very well and there was nothing left of the Soviet vehicles by the end.

This was a great game, it flowed well and we all were able to hold the rules in our heads. What I liked with playing against an opponent was not knowing what tactics they were going to use. I had a few surprises, for example, when they withdrew from a fight despite me expensively stacking the odds in my favour to no avail.A great game and I look forward to our next one!