I have been up in Scotland for the past week working on an excavation of some First World War trenches alongside veterans suffering from PTSD and other injuries. There is some information n the Facebook page of Operation Nightingale and Breaking Ground Heritage, both of whom are involved with the work. Click on the names to see more about the project (and give them both a 'like'!).

In between that time, I managed to complete the first Imperial Guard cavalry base, namely the 1st Brigade Régiment de Vieille Garde Chasseurs à Cheval. 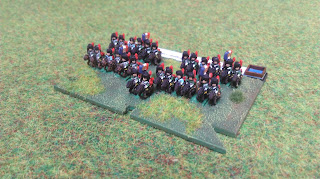 The Chasseurs were commanded by Baron François Lallemand, who's brother Henri also fought at Waterloo, in command of the Guard artillery. After the battle, François tried to follow Napoleon to St Helena, but was imprisoned on Malta for two months before escaping to America and settling in Texas for a while. By 1830 the Bourbons had been overthrown and he was able to travel back to France where he joined the Army General Staff until his death in 1839. This, despite having been sentenced to death after Waterloo! 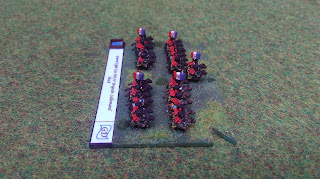 The Chasseurs really should also have 26 Mamelukes amongst their number, but at the scale I am doing them this equates to about half a figure, so I left them off (that and I couldn't source any Mameluke cavalry in 6mm...). 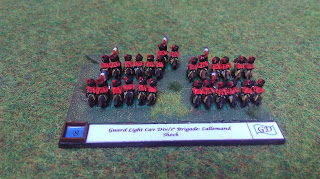 Another step closer to completing the Guard (and maybe having a game one day...).