Last Tuesday Grandfather_Nurgle called over to my house for a day of games. We'd not seen one another for a couple of years, so it was good to catch up and actually play a couple of games together.

The first game we played was 3rd Edition Blood Bowl. I've been a long time fan of 2nd Edition BB, but have never tried the later version (which has a good press). As we wanted to play as many games as possible we played 'Sevens', a Sunday League version of the game with only seven players per side and a smaller pitch. This would give me a chance to get used to the rules and still fit in a bigger game of Blücher later. So, I took my Gouged Eye orcs and he used some Human figures he'd picked up off EBay (but had not yet got around to repainting (he paid me to say that...)). 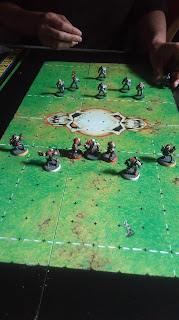 I won the toss and got the ball, I sent my Blitzers and the Black Orc down the centre looking for a weak point in his defence line. 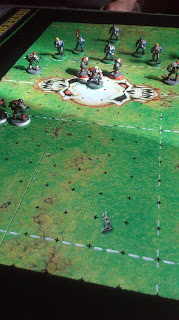 Then the humans took their turn, stepping up to block my mid-field, whilst ganging up on a poor lineman on the wings. 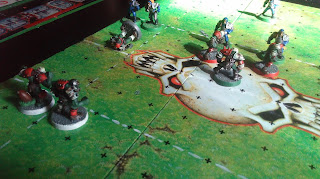 A bit of brawling and argy-bargy in the centre saw the human line weaken slightly, so I switched my attack to the right wing. 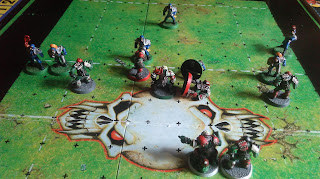 Then both of my Blitzers went down! 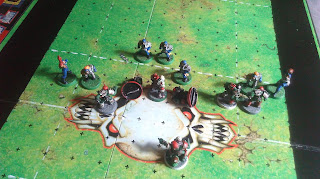 And then, disaster; Black Orc Down! 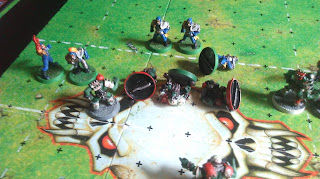 Exploiting my players sprawled across the pitch he made a run for the ball, but was just short of plucking it up. 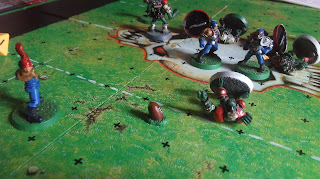 I took the advantage, my thrower grabbed the ball and lined up a chuck with one of my blitzers. 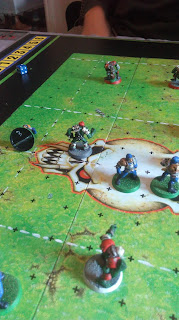 One was jumped on by two humans, but I still had another Blitzer waiting in the wings, he snatched the ball and sprinted for the endzone! Touchdown! 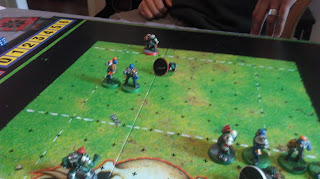 The Orcs scored on their last turn of the first half and I enjoyed the game thoroughly. 3rd Edition is a lot quicker and I like the switch over rule, in that if you make a mistake, the turn switches to your opponent. It really speeds up the play. I'd like to try a bigger sized game and see how that holds up.

However, by that time, Ninjasaurus Rex has also turned up and we moved onto a game of Blücher. We used the same forces as last time, ie three Corps each, and I took the British defence lining a ridge. As it was Grandfather Nurgle's first game he and Ninjasurus teamed up as the French attackers. Their task was to capture two of three objectives to win, I had to stop them from doing this for a British victory. 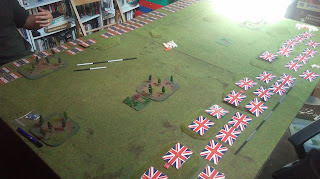 The opening moves saw the French wings begin their slow march across the field. 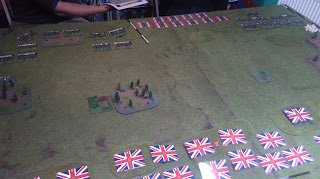 Then the Imperial Guard revealed themselves in the centre and the mass of men, horses and cannons began their advance. 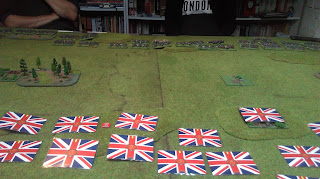 This allowed me to reveal a foot artillery battery on a hill and start taking shots at their Lancers. 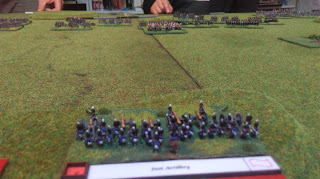 I held back from revealing more of my units, which worked as I could hear them chuntering about where my other artillery battery was (I didn't have one, I'd split it up as attached artillery, but a bit of poor enemy intelligence always helps!). 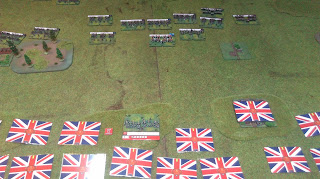 Suddenly, they released their Red Lancers, bearing down on the British artillery! This automatically revealed a lot of my units as the cavalry came within 4 base widths of them. 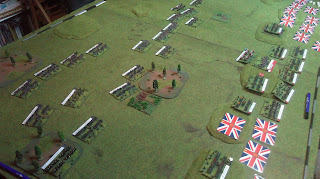 Similarly on my left flank the French infantry had advanced so far forward they could see the British units on the ridge line. 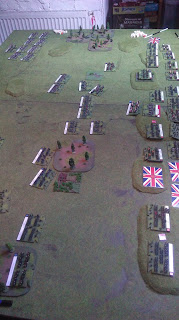 The inevitable result of cavalry charging artillery was the artillery fell back, but as my back line was crowded there was nowhere for them to go, except retire off table! 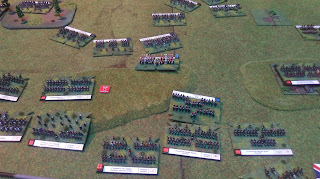 Meanwhile on the left the British defence line was exchanging shots with the advancing French. 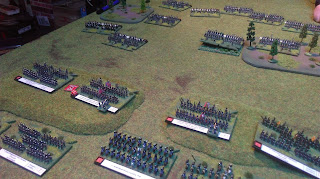 With the artillery gone in the centre (I did forget to take photos of the previous few turns... oops...) the French cavalry was having a field day smashing into my Dutch conscripts. 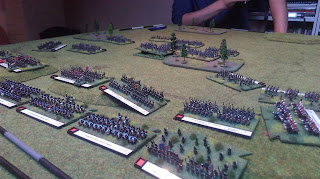 The Lancer and Grenadiers a Cheval made a formidable combination against the British troops holding the objective on the middle hills. Forcing the infantry off the objective the Cavalry captured it in quick time. 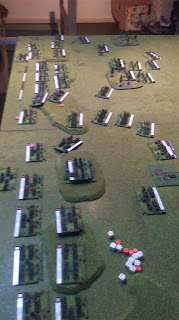 On the left the French infantry had mauled the British Guards so heavily that their defence crumbled and they were also forced off the second objective! 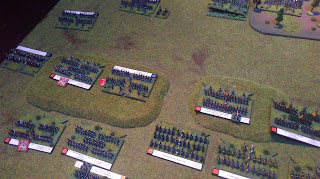 It was all over and was a very quick victory by the French. In lessons learned, I should have really advanced some of my forces to absorb the advancing threat, having everything bunched up on the back line meant that as soon as a brigade was pushed back from combat they retired off the table as there was no where else for them to go! Maybe capturing one or two of the small houses in the centre of the table would have given the French a strongpoint to have to deal with.

All in all though another good game of Blücher and a good gaming day all around!