In a week that has seen quite an upheaval in my personal life,ie, my wife moving to Vienna for a year long job at the Austrian Academy of Sciences, I have been slowly working on the Imperial Guard. The latest being the 2nd Brigade commanded by General de Brigade Baron Nicolas-Philippe Guye. It was made up of the 3rd Tirailleur Regiment and the 3rd Voltigeur Regiment. 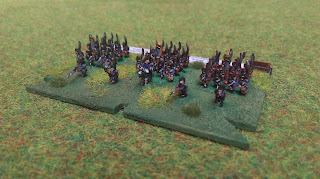 In Blücher terms, this is an Understrength unit, so therefore it only has three battalions as an aide-memoire. 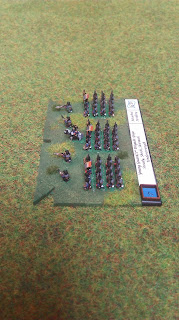 Despite being Understrength it still has an Elan of 7 and is Steady and also causes Shock, meaning it is one of the most powerful Understrength units on the table! 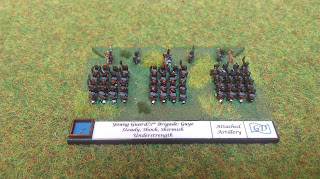 As with my other Imperial Guard infantry these are in attack columns. 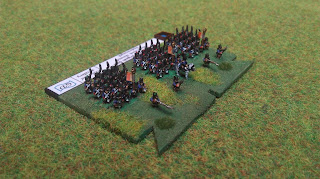 As I said, I will have a bit more time to paint more tiny little men, so hopefully the Imperial Guard won't be long off finished, with only three cavalry brigades to paint now!
Total 6mm figures painted: 3,220
Thanks for reading!
Labels: 6mm Baccus Blucher Imperial Guard Infantry Napoleon Napoleonics Waterloo