When we worked in Bullecourt a few weeks ago, one of the major discoveries was a six foot length of tank track from a Mark II training tank that was rushed out to attack the German positions with the Australian Brigade in early 1917. On that tank track was some of the original paint, which was photographed by our photographer Harvey Mills, who then matched the colour that the Mark IIs were painted into the Pantone Matching System equivalent. As far as I am aware there is not a single example of original paint on any of the surviving First World War tanks in museums across the world. All have been repainted over time, so this is the first time in 100 years that we can see the exact colour. What is intriguing is that the tank tracks were also painted in this colour, so now, you will be able to paint your First War tanks in the correct scheme! 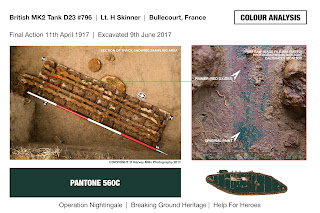