There were no blog post last week as I was in France working at Bullecourt for an excavation run jointly by Operation Nightingale and Breaking Ground Heritage. Both of these groups use archaeology to give wounded, injured and sick (WIS) soldiers new skills and help their rehabilitation, especially those suffering from PTSD. I was there as archaeology supervisor and the project was centred around locating some of the tanks which went into action with the Australian forces that attacked the Hindeburg Line in April 1917. I will not give a full description of the battle, but click this LINK to read more about the operation.

One of the research aims of 'Ex Joan of Arc' (as the project was known) was to see if we could locate tank remains of Lt Skinner's vehicle, a rare Mark II, numbered D23 796, and destroyed by German fire on the 11th of April 1917. From aerial photos we knew the location after the battle of the tank, so this was the obvious place to look! 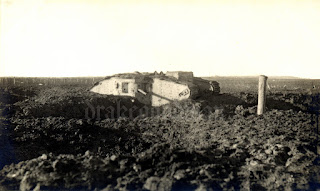 Skinner's Tank after the Battle of Bullecourt

However, on arrival in France, our first act was to visit the sexiest lady on the Western Front, Deborah D51. This tank had been recovered near Flesquières in 1998 and currently housed in a barn, for more information click HERE. 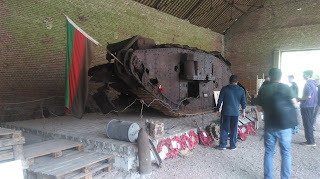 Then we had a quick look at the memorials in and around Bullecourt: 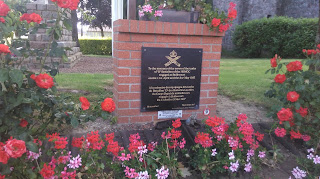 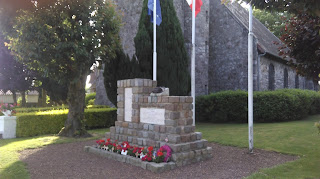 Including the Diggers memorial for the Australian infantry who were involved in the April 1917 operation. 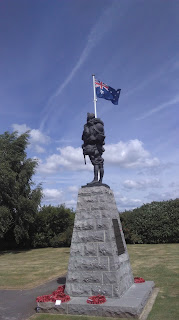 Using the geophysical survey readouts we located the archaeological trench, directly over what we thought would be the Hindenburg Line. Then work began and almost immediately unearthed a piece of tank! It may not look like much but it's the chain link from the gear systems within the behemoths. It also appears that it has some battle damage inflicted on it. 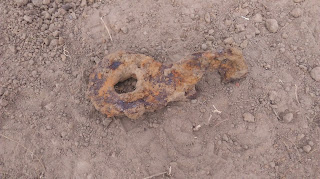 First World War battlefields are littered with dangerous materiel, this one was no different, and we unearthed a German stick grenade. This was still live and it was the task of our EOD cover to remove it to a safe place. It was not the last one we found either... 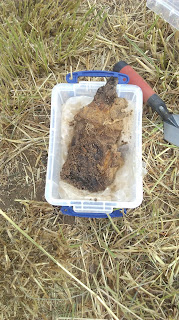 With the clay under the topsoil being baked solid from hot days and a dry winter, we had to get a machine in to remove the earth down to archaeological layers. Having done so, this mysterious object emerged and many theories about what it could be were being thrown about! 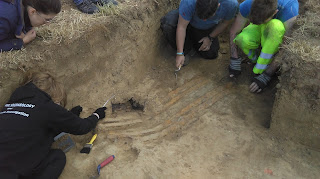 It wasn't long before we knew exactly what we were dealing with, the mysterious object was several links of tank track! 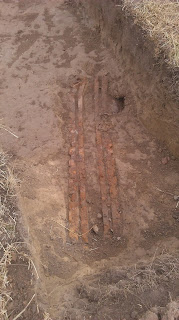 Meanwhile, work in the rest of the trench continued, cleaning back the natural clay earth a single shell crater was obvious in the centre. Also on the left you can see the dark grey clay where the tank track lay. But, no Hindenburg Line! The geophysical survey must have picked up the remains of the tank, this shellhole and the Elephant Iron, as we were supposed to be directly on top of what looked like a stretch of German trench in the results! 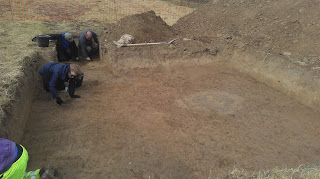 The veterans worked hard on cleaning up the tank tracks to reveal them for the first time in a century. 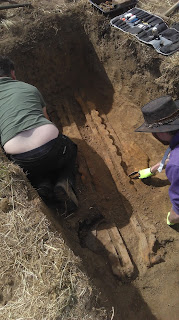 Beyond all expectations, the track also had a 'spud' attached for manoeuvring over rough ground. It's the large blob about half way along the right hand side of the track. 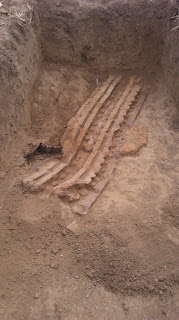 Meanwhile at the south end of the trench, work was progressing on some large Elephant Iron sheets. These appeared to be laid in a large shell crater and had possibly been dumped there after the war. 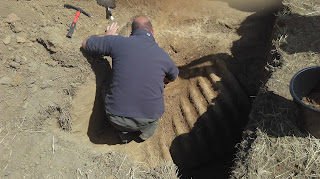 In the baking sun the track was cleaned to a very high standard by the volunteers. 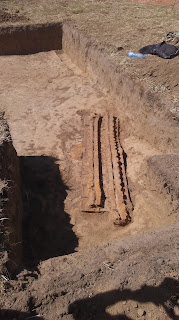 As were the Elephant Iron sheets. They may be covering something, like a bunker, bodies or explosives, but we were not to find out as time was against us and they were just outside the area we had been allowed to excavate by the local DRAC (French equivalent of a County Archaeologist). 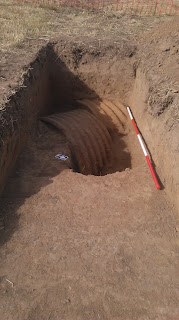 As the end of the week was looming, it was all hands to the pump to get the track cleaned ready for recording (and to show it off to the local mayor and other dignitaries!). 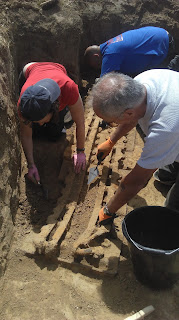 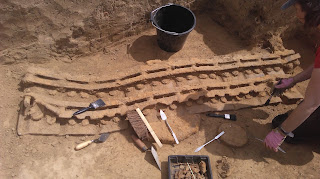 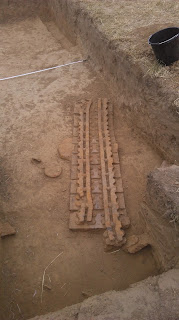 Finally the track was clean enough to record. The scale is 2m long. 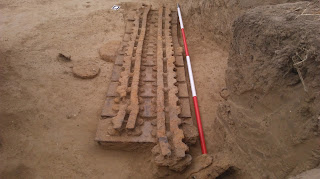 This included some daring dos, by our official photographer Harvey: 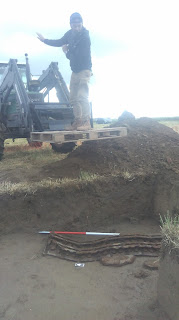 Then came the time to lift the track, this was helped by the farmer Didier's tractor and some large chains. 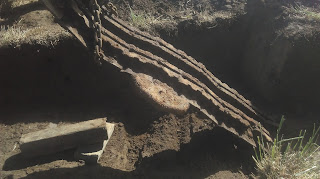 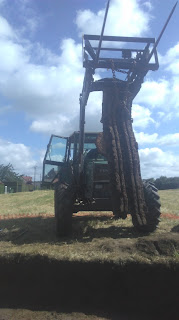 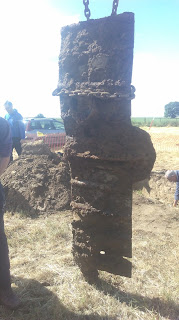 Underneath the track we also uncovered the remains of two German soldiers (I have no photos of them as we were trying to control their images getting out on the net until official release). We dealt with the soldiers to the highest of professional standards, it took two days to excavate their remains and most of the soldiers stayed on site to guard their brothers in arms overnight.

With the soldiers recovered we headed home, stopping off at the impressive Indian Memorial at Neuve Chapelle: 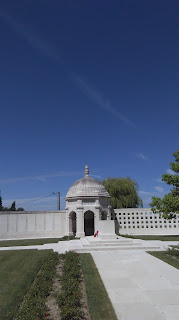 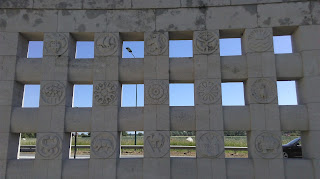 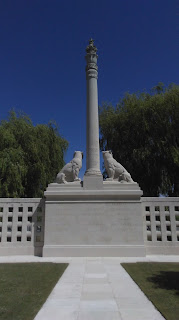 And from the Haynes Manual on the Mark IV tank here is where the chain link that we first found would be located (number 21). 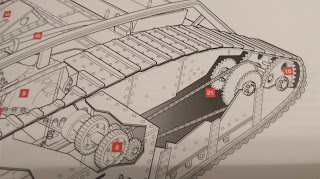 And a picture of the individual track links that we found. There was even some paint remains on the underside of one of the tracks. This was amazing as the surviving First World War tanks have been repainted numerous times, so no one is entirely sure of what colour they originally were. The release of this information will have to wait until Harvey has Pantoned the paint fragments, but it's very exciting! 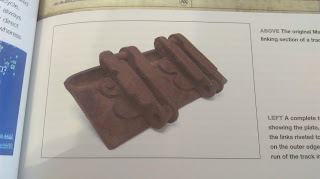 All in all, one of the best and most successful excavations I have been involved with in France. Not only did we find exactly what we had set out to find (a tank!) and recovered two lost soldiers who will be reburied in a military cemetery, but the involvement of the veterans made it all the more special. This project demonstrates exactly the good work that archaeology can do to men recovering from some of the worst stresses that combat can throw at them. 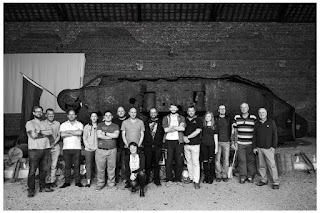 Photo thanks to Harvey Mills

And why was the project called Exercise Joan of Arc? Well, the commander of the Australian 48th Battalion (which took part in the 1917 battle) was Lt Col Ray Leane, who also had other members of his family scattered through the unit. The battalion was known as the Joan of Arc Battalion as it seemed to be 'made of all Leans' (Maid of Orleans)... Who says war is miserable?