The third brigade of 4th Division of the Allied II Corps was the 6th Hanoverian Brigade. Like the other Hanoverian brigades in Wellington's army the battalions were named after the Hanoverian cities, so this unit had the Launeberg, Kalenburg, Nienburg, Hoya and Bentheim battalions in it. 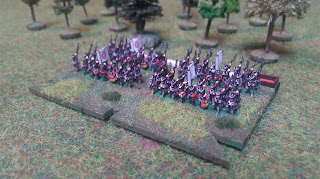 As this is a normal sized unit in Blücher I left off the fifth battalion and stuck with the usual four to avoid confusion on the table. As with my other recent Hanoverian unit I reused the flags that I had sourced before. It's not entirely accurate, but until someone can supply me with every single Hanoverian regimental flag I'm happy with their look. 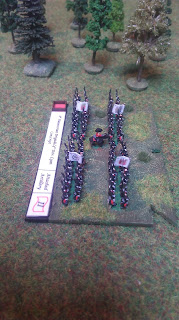 The 6th Brigade took no part during the Battle of Waterloo, being stationed out at Hal in the west, but it is part of the 100 Days Allied OOB, so is included for that reason and could have fought at some point in the campaign. 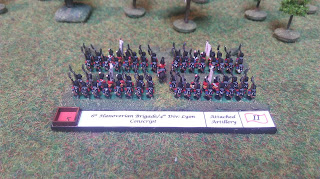 The Hanoverian uniforms were pretty similar to the King's German Legion's, so it is nice to add another red-coated unit to the total. 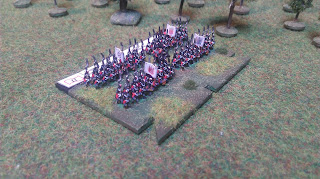 Over half way there now with II Corps. The Easter break allowed me to hammer out some of these units, so I am getting ever closer to the finish line, for II Corps at least... However, I am back at work now, so it will slow down a little.