I am really flying through the brigades of II corps at the moment and the next finished unit is the 3rd Hanoverian Brigade, commanded by Colonel H. Halkett. It consists of the Bremenvörde, Osnabrück, Quackenbrück (my favourite name for a formation...) and Salzgitter regiments. All of which were Landwehr units. 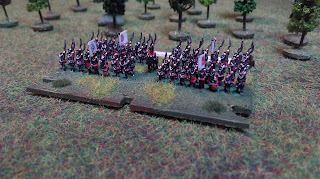 It was also the weakest of the Hanoverian units, with only just over 2,500 men. During the battle of Waterloo they were held back in reserve with the rest of their Division (3rd) behind Wellington's right. 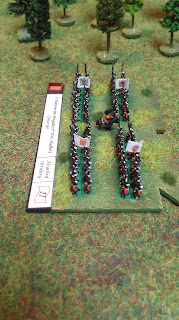 Later in the afternoon the Brigade advanced and formed square on the reverse of the slope behind Hougoumont. Finally, the Osnabrück regiment took part in defeating the Imperial Guard and the brigade commander Halkett took the surrender from Maréchal de camp Cambronne, the commander of the Chasseurs à Pied of the Imperial Guard. 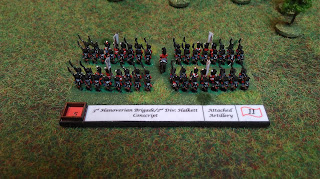 The figures are the Baccus British infantry in Belgic Shakos, with one of the flag bearers replaced with an infantry figure. Speaking of the flags, as the Hanoverian flags are so difficult to track down, I just reused the flags I had found for the 1st Hanoverian Brigade. It's not a perfect solution, but avoids lots of hair tearing on my part... 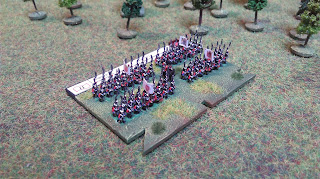 So, the third unit of ten is complete, soon II Corps will be complete! Then  have to start thinking about which Corps to tackle next... But that is long away in the future right now!