Ninjasaurus Rex gave me a bag full of scratchbuilt terrain pieces that he had kicking around. They were prepped, but unpainted so my task was to finish them off for my 15mm Star Wars Miniatures Battles games.

He had already mounted some on bases and sprayed them with textured paint, so really they only needed finishing off. I am not sure what the first batch were originally, but they look like various light fittings, however, I added a circle of plasticard to each of their bases, painted the interior black, the outside grey, layered up some drybrushing, added some weathering and rust details and they now look like exhaust ports. Cos everything in the Star Wars universe has an exhaust port, amiright? 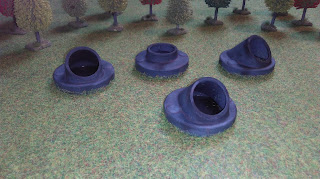 Next up were two mini-CD holders with some form of plastic frame added on top. These were mounted on normal sized CDs, so my job was reasonably easy, paint grey, drybrush in lighter grey, weathering, rust, flock the bases and hey presto: 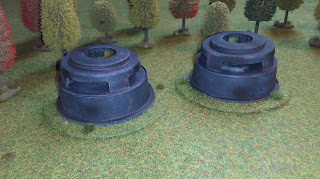 The upper frames can be removed to make separate structures in their own right and leave the lower portion looking like fuel containers or similar. I am going to make some heavy blasters that can fit in the upper frames, that will also be removable, to make them into defence towers. But I just wanted to get the basics finished first. 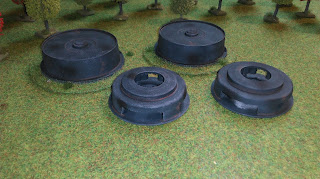 And finally a circular tube with what looked like another light fitting in the centre. With a splash of paint and weathering this looks like some form of generator or another larger exhaust. 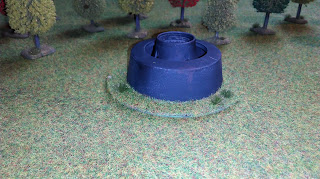 So, what was basically a bunch of DIY and office leftovers, between us we have made a selection of reasonable looking science-fiction utility buildings. To give you an idea of scale here they are with a 15mm AT-ST and some Stormtroopers. 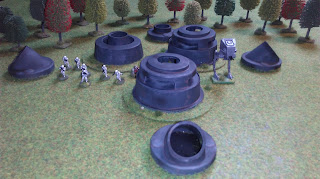 They were all pretty easy to paint, just a basic grey with some weathering and drybrushing, nothing too fancy, really. I also have a larger building that will need quite a bit of work, especially the interior, so check back in the future for details on that!