Deliver Us, Oh Lord, From The Wrath of the Norsemen!

Another small project I have started recently, has been a Viking Age skirmish game, this is why I built the Icelandic farmstead and also why I bought myself some Viking figures from Vapnartak. I only wanted a handful as I want the game to be based around small bands of warriors competing for the best loot.

So, I called at the Museum Miniatures stand and picked out about twenty figures and then took a walk over the Peter Pig and bought a set of Vikings carrying loot. These photos are of the first two batches of figures. 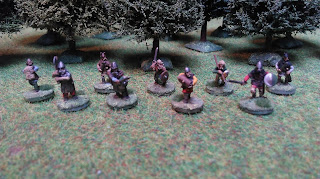 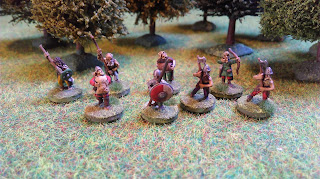 The figures are all individually based as the game is a skirmish.

I have about another ten of these to paint over the next few days, so check back in the future to see them finished off as well!