A while ago, I made a couple of boards to give myself some new gaming boards. It was a very simple and relatively cheap process, but I had originally started the project with the idea of making a Square Bashing specific board. One reason I don't play as much SB as I'd like is because the bard takes such a long time to set up with using thread and pins. So creating a specific bard for the game reduces that time.

So, with this in mind, I prepped the underside of one of the boards I had already finished and painted it brown. Next task was to mask off the squares used in SB, these are six inch and I used masking tape strips to cover the board: 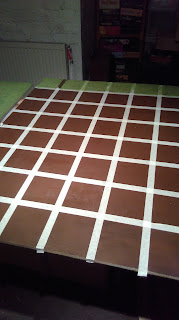 Then it was simply a task of flocking the entire board, this was done by painting PVA over the surface and sprinkling the flock over that. After leaving it all to dry over night I then knocked off as much flock as I could, then finally hoovered the rest off. 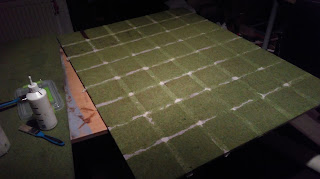 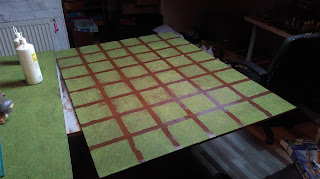 I am not sure whether to leave the lines as they are, or get some different coloured flock to line the lines, but that is a consideration for the future. It's perfectly usable as it is and takes no time in setting up a game!