So the final part of this Bristol Fighter WIP rolls in to view! Toy can read Parts ONE, TWO and THREE by clicking on the words.

The next task was to add the struts for the upper wing support. This was a fairly easy job and I used the Lego frame I had used in the previous post to get them in the correct position. I also began adding the wing rigging at this point: 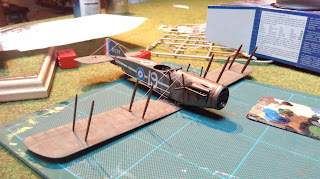 Before I went too far with that, I glued the upper wing in place and left the thing to dry. 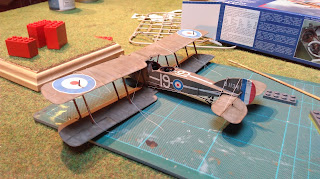 Then was the painstaking process of attaching the rigging to the struts. This was speeded up with the use of CA accelerator, which I never knew existed. It speeds up the setting time of Super Glue and is a God-send for rigging planes as the EZ Line snaps back without it! 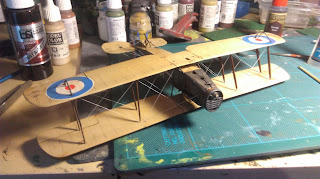 After the rigging was done (there are a few bits I missed out, it was my first time using EZ Line, so I didn't want to over-egg the pudding on the first go...) I added the undercarriage, unfortunately the decals on the wheels didn't stick properly so I had to do without them. 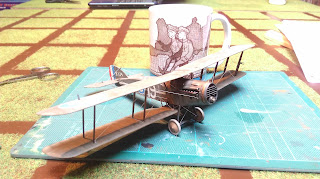 The last stage was adding all the final bits and pieces, like the rear gun carriage, propeller and bomb carriages under the wings. I left the bombs off, as if the plane was back from a mission. The model was then fixed to its base (which had been flocked earlier) and Ta-Da! 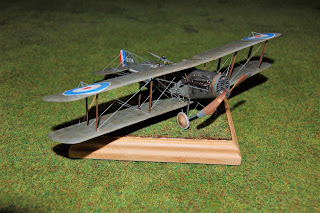 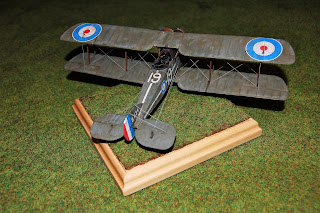 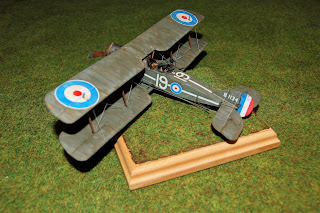 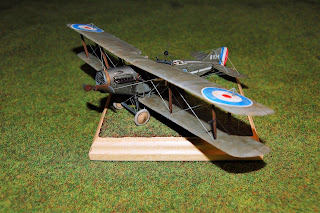 All in all a really enjoyable kit, largely because of the ease of use of EZ Line. This stuff has been a revelation for me and I am now thinking of making another British plane, maybe a Camel or SE5a, along with all their rigging! But, that's for the future...