When I left off in the previous post (click here for Part One and here for Part Two of this Bristol Fighter WIP), I had the fuselage largely done. So I turned my attention to the wings and added all the tiny parts. Both wings were painted roughly (and you may also notice that I put the gun sight on the top of the upper wing by mistake. This was later rectified...).

I also weathered the fuselage and engine. This was done by painting blobs of White onto the surfaces and then smudging them about with water to make the fabric look worn and aged. On top of that I then did the same again but with Green Grey to try and emphasise the struts on the tailplane below the fabric and to dampen the brightness of the white. Finally, I then put a very thin wash of Flat Earth over the plane. The engine was simply washed in Army Painter's Strong Tone. I used this to add oil streaks and other splats on the rest of the plane as well. 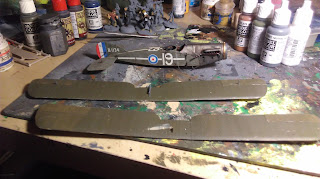 I am very pleased with the result of the weathering and it's something I will try to improve on over time. I also decided it was time to begin the thankless task of rigging the plane. I had been dreading this stage as previous planes have never really turned out as I wanted when it's come to the rigging. However, I am a total convert to EZ Line! This stuff is amazing, there was no fuss, no swearing, no melted plastic, just really nice rigging. 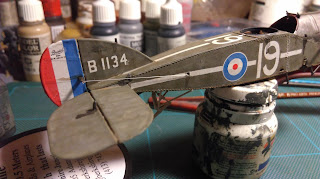 It took a while, but I got all the fuselage rigging done, and best of all, it was enjoyable! I have taken a few liberties, I have left off some of the shorter lengths, for now at least. I may go back and add them later on in the build. 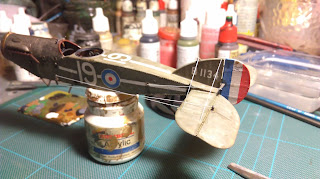 The underside was also rigged in good time and with nice results. I am even thinking of going back and re-rigging some of my other 1/48th scale aircraft this stuff is so good! 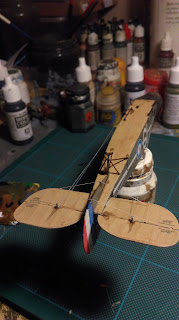 The next step was to add the lower wings to the fuselage ready to start adding the wing struts (and the rigging there...), so the wings were weathered and added and the whole thing left to dry. 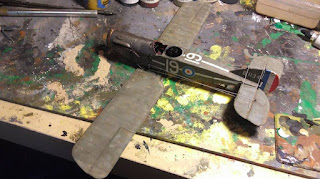 Then I began the painstaking process of adding the wing struts. The short ones around the cockpit went on first, with some help of some spare Lego blocks... I am doing each tier of struts separately so I can build up the rigging as I go and it doesn't make the whole thing too fiddly. 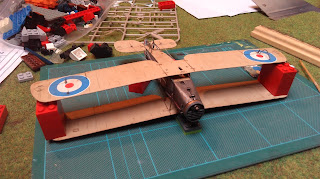 This was then put aside as I went up north for work again... It's a slow process when you work away part-time of the week!

There is more to come on this build, but for now, thanks for reading!
Labels: 1/48th Aircraft British Model kits Work in Progress WW1