Another aspect of the Waterloo project that I have been working on recently is the artillery. In Blücher, artillery comes in one of two types; attached and batteries. I have already created quite a few attached artillery tokens to sit on my French and British bases and the most recent ones were these two French 5.5" howitzers, nice and simple: 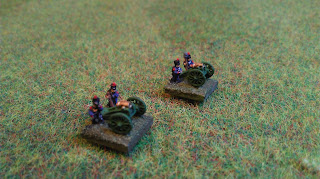 The size of the guns doesn't matter for Blücher, given it's brigade level, so it was nice to be able to mix in different artillery types as tokens. However, something I have been giving a lot of thought to since I began this project was the battery bases. Three attached artillery tokens can be grouped to make a battery in the rules, so my first idea was to make a base that had sabots to fit the attached tokens into. However, this felt like a lot more work than I wanted to spend on the bases and I thought the final thing might look a little weird anyway. So I have decided to make battery specific bases, of which this is my first French base: 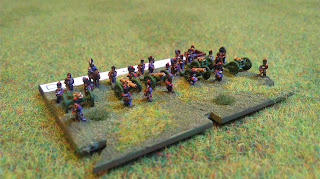 It's made up of four 6 lbers and two 5.5" howitzers, as most batteries during the 100 Days Campaign were. This represents a typical foot battery. 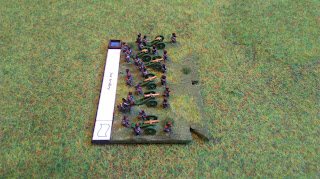 As there are only a handful of battery cards in the 100 Days Campaign cards I am using, I am happy to make all the artillery batteries like this. Obviously the horse and heavy batteries will have other features to make them look the part and in future I would like to add Caissons to the base to give them even more detail. But for now this suits my needs and was an experiment. 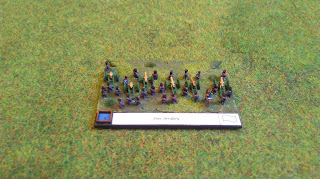 I'm looking forward to modelling Napoleon's belles filles, the 12 lbers used as part of the Grand Battery at Waterloo. But all that is in the future for now!