The penultimate infantry brigade for II Corps is the 1st Brigade, 9th Div. This brigade was commanded initially by Baron Gauthier (who's name is on the base label), and consisted of the 92nd and 93rd Line Regiments. 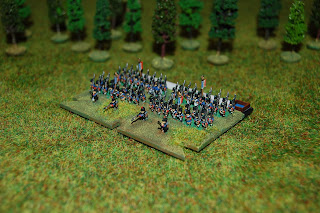 The 9th Divison fought at Quatre-Bras on the 16th of June where it was fully committed and lost about 800 men, including Gauthier. He was later replaced by Colonel Tissot. As these units are for the campaign, Gauthier is named as commander on the label. 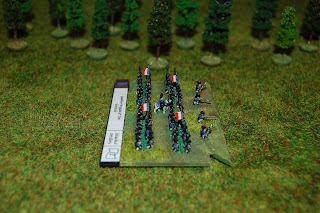 The 93rd Ligne had fought as Marines at Trafalgar, so the Brigade had history! At Waterloo the 9th was deployed against Hougoumont and later supported the Imperial Guard's final assault. 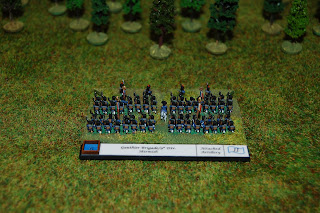 I have one more brigade of infantry to paint for II Corps, then the cavalry to finish off the full Corps.