Last week, with a bit of spare time to kill I decided to try out the Judge Dredd rules by Mongoose Publishing. Having been painting the figures for a while now, I thought it would be a good idea to see how the rules played out...

I set up some scenery from my 15mm World War Two collection, which is why it looks undersized to the figures. It was a basic engagement in the Jungle, the ruined area of Mega-City One dominated by Apes. A street Judge and two Cadets had been sent into the area to clear out a hive of Ape Liberation Front members. It was the Cadet's first time on the streets and part of their training.

So the Judges were outgunned from the start and the set up looked like this, with the Apes split into three fire teams. 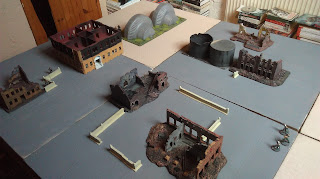 I sent one Cadet off to the Judges' left flank, whilst the other Cadet and Street Judge went right. Meanwhile, the Apes used cover to get into a better position for firing. 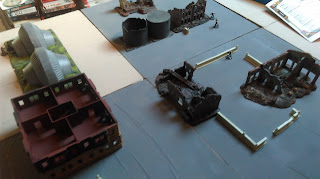 The Cadet on the left worked her way behind cover to face off against the Apes on that flank. 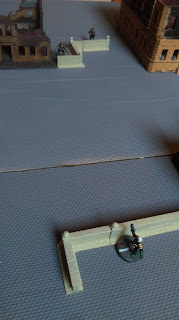 The Apes opened fire with their Spit Guns and the unfortunate Cadet was cut down even taking cover! 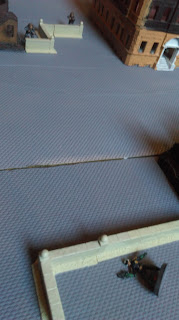 In the middle of the street the Street Judge was similarly put out of action by the two Apes in the middle building. 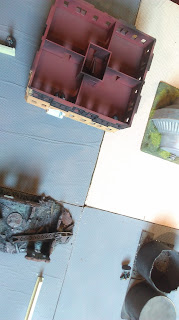 And although the final Cadet had reached cover, he was taken out by the Apes! 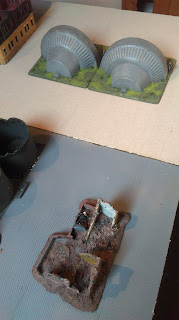 First game over and the Judges had barely fired a single shot! I reset the board and gave it another try. This time the three Judges stuck close together to move into cover. 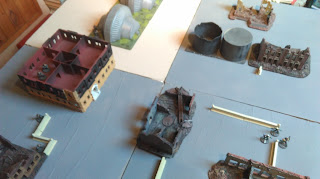 The apes similarly bunched together on their left flank as the Judges worked their way forward. 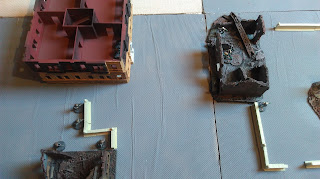 Initially the Apes' firing was accurate and a Cadet went down. 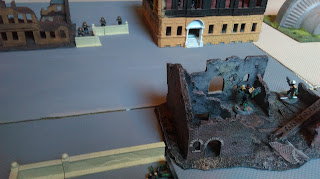 But, using Stumm Gas, the Street Judge was able to incapacitate three of the Apes! 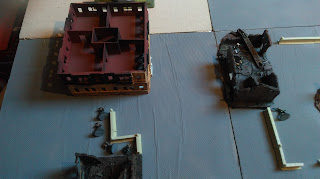 Relying on the better ammunition in their Lawgivers, the Judge and Cadet used heatseekers to whittle down two more Apes! 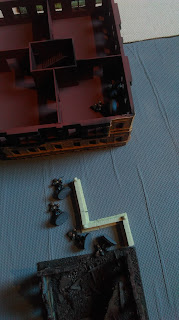 The final Ape failed a willpower test and fled from the scene, well, with five of his team mates down and two Judges to face, it was probably the wisest decision. 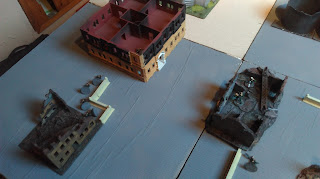 The two games took no longer than an hour from beginning to end and both had a satisfactory conclusion. The second one, more so, as the Judges made more of the cover and their weapons to bring the Apes down.

The rules are pretty simple, after the first few shots they are easy enough to hold in your head and run pretty smoothly. The only thing I am aware of happening is games becoming like a Western style shoot-out, which I would prefer not to happen. The Judges are not allowed to fire first and either must try to arrest a perp or be shot at before they can fire. This makes a nice rule, but I need to have a think about how to set scenarios based on the day-to-day life of a Street Judge. I see this as more like roleplaying than wargaming, but how to get that balance may prove tricky.
Labels: 28mm AAR Apes Judge Dredd Justice Department