It has been quite a while since I touched any 6mm Napoleonics, the house move interfered with the 100 Days Campaign project and then general laziness took over. The brigades take quite a while to finish, so I was loathe to start up again and cracked on with other easier figures and projects.

However, last week I started the next base for the French II Corps, namely 2nd Brigade, of 6th Division, commanded by Baron Soye. This formation consisted of 1st and 2nd Ligne. 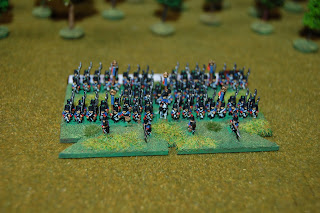 For Blücher, this formation is also overstrength, hence the five battalions. This was partly because the parent unit, the 6th Infantry Division, was commanded by Napoleon's brother, Prince Jérôme Bonaparte. 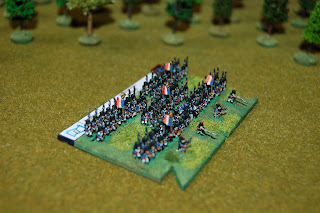 Also a screen of skirmishers out front adds to the strength of this particular Brigade.During the Battle of Waterloo, the 6th Division was engaged at Hougoumont where it opened the battle with a supposed diversionary attack on the farm. The struggle lasted all day! 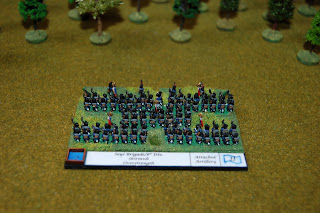 Just to add to all this firepower, the brigade also has an Elan of 7, possibly reflecting the fact that the 1st Ligne were veterans and had fought at Trafalgar as marines. The whole division was also heavily engaged at Quatre Bras, losing some 1,000 casualties. 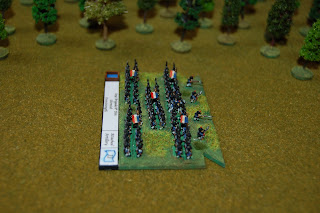 This is the half-way point for II Corps, with four more infantry bases to finish and one cavalry, but that is for the future!